By Sr. JosephMary f.t.i.August 15, 2008March 28th, 2019Ave Maria Meditations, Devotional, JosephMary
No Comments
Ave Maria Meditations
August 15th: The Solemnity of the The Assumption
40. Hence the revered Mother of God, from all eternity joined in a hidden way with Jesus Christ in one and the same decree of predestination, immaculate in her conception, a most perfect virgin in her divine motherhood, the noble associate of the divine Redeemer who has won a complete triumph over sin and its consequences, finally obtained, as the supreme culmination of her privileges, that she should be preserved free from the corruption of the tomb and that, like her own Son, having overcome death, she might be taken up body and soul to the glory of heaven where, as Queen, she sits in splendor at the right hand of her Son, the immortal King of the Ages.

3. Actually God, who from all eternity regards Mary with a most favorable and unique affection, has “when the fullness of time came” put the plan of his providence into effect in such a way that all the privileges and prerogatives he had granted to her in his sovereign generosity were to shine forth in her in a kind of perfect harmony. And, although the Church has always recognized this supreme generosity and the perfect harmony of graces and has daily studied them more and more throughout the course of the centuries, still it is in our own age that the privilege of the bodily Assumption into heaven of Mary, the Virgin Mother of God, has certainly shone forth more clearly.

4. That privilege has shone forth in new radiance since our predecessor of immortal memory, Pius IX, solemnly proclaimed the dogma of the loving Mother of God’s Immaculate Conception. These two privileges are most closely bound to one another. Christ overcame sin and death by his own death, and one who through Baptism has been born again in a supernatural way has conquered sin and death through the same Christ. Yet, according to the general rule, God does not will to grant to the just the full effect of the victory over death until the end of time has come. And so it is that the bodies of even the just are corrupted after death, and only on the last day will they be joined, each to its own glorious soul.

5. Now God has willed that the Blessed Virgin Mary should be exempted from this general rule. She, by an entirely unique privilege, completely overcame sin by her Immaculate Conception, and as a result she was not subject to the law of remaining in the corruption of the grave, and she did not have to wait until the end of time for the redemption of her body.

39. We must remember especially that, since the second century, the Virgin Mary has been designated by the holy Fathers as the new Eve, who, although subject to the new Adam, is most intimately associated with him in that struggle against the infernal foe which, as foretold in the protoevangelium,would finally result in that most complete victory over the sin and death which are always mentioned together in the writings of the Apostle of the Gentiles.Consequently, just as the glorious resurrection of Christ was an essential part and the final sign of this victory, so that struggle which was common to the Blessed Virgin and her divine Son should be brought to a close by the glorification of her virginal body, for the same Apostle says: “When this mortal thing hath put on immortality, then shall come to pass the saying that is written: Death is swallowed up in victory.”

44. For which reason, after we have poured forth prayers of supplication again and again to God, and have invoked the light of the Spirit of Truth, for the glory of Almighty God who has lavished his special affection upon the Virgin Mary, for the honor of her Son, the immortal King of the Ages and the Victor over sin and death, for the increase of the glory of that same august Mother, and for the joy and exultation of the entire Church; by the authority of our Lord Jesus Christ, of the Blessed Apostles Peter and Paul, and by our own authority, we pronounce, declare, and define it to be a divinely revealed dogma:?

that the Immaculate Mother of God, the ever Virgin Mary, having completed the course of her earthly life, was assumed body and soul into heavenly glory.

45. Hence if anyone, which God forbid, should dare willfully to deny or to call into doubt that which we have defined, let him know that he has fallen away completely from the divine and Catholic Faith. 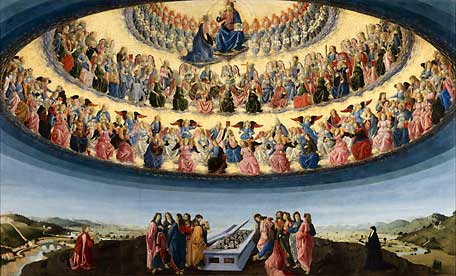 Mary’s Assumption shows us the route we must follow in our spiritual ascent : detachment from the earth, flight toward God, and union with God.

Our Lady was assumed body and soul into heaven because she was Immaculate; she was all- pure-free not only from every shadow of sin, but even from the slightest attachment to the things of earth, so that she” never had the form of any creature imprinted in her soul, nor was moved by such, but was invariably guided by the Holy Spirit”

The first requirement for attaining God is this total purity, the fruit of total detachment. The Blessed Virgin, who lived her earthly life in absolute detachment from every created thing, teaches us not to allow ourselves to be captivated by the fascination of creatures, but to live among them, occupying ourselves with them with much charity, but without ever letting our heart become attached to them, without ever seeking our satisfaction in them.

In her Assumption Mary speaks to us of flight toward heaven, toward God. It is not enough to purify our heart from sin and all attachment to creatures, we must at the same time direct it toward God, tending toward Him with all our strength. The Church has us pray in today’s Mass, “0 Lord, through the intercession of the Blessed Virgin Mary who was assumed into heaven, may our hearts be enkindled by the fire of Thy love, continually aspire toward Thee” (Secret). Our earthly life has value for eternal life insofar as it is a flight toward God, a continual seeking after Him, a continual adherence to His grace. When this flight fails, the supernatural value of our existence lessens.

Mary has been taken up to heaven because she is the Mother of God. This is the greatest of her privileges and the root of all the others and the reason for them; it speaks to us in a very special way, of intimate union with God, as the fact of her Assumption speaks to us of the beatific union vision of heaven. Mary’s Assumption thus confirms us in this great and beautiful truth: we are created and called to union with God. Mary herself stretches out her maternal hand to guide us to the attainment of this high ideal. If we keep our eyes fixed on her, we shall advance more easily; she will be our guide, our strength, and our consolation in every trial and difficulty.