A Year of the Priest meditation 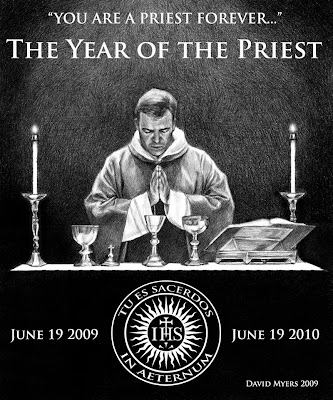 The priesthood in the Catholic Church is identified with many things. The priest can be pastor, teacher, counselor, writer, admin­istrator, or social worker; but the main reason he has been ordained is because of the Eucharist. So true is this that if we would specify the heart of the priesthood we would have to say it is the Eucharist: the Eucharist as Presence and the Eucharist as Sacrifice. A priest makes the Real Presence possible and no one, no king, no ge­nius, not even the will of a thousand people, nor the combined efforts of a whole nation, can substitute for the power of a priest’s consecrated words: “This is My Body. .. This is the chalice of My Blood.”

As the Fathers of the Church do not hesitate to say, there is no less a miraculous change taking place on the altar than took place in the womb of Mary at the moment of the Incarnation. Before she pronounced     her words there was no Christ on earth. The moment she did, He took dwelling in her body. The moment before the words of the priest are pronounced over the elements of bread and wine there is just bread and wine. He pronounces the words, and then divine power changes the substance of bread and wine into the very living Body and Blood of the living God.

The Mass is simply and unequivo­cally the sacrifice of Calvary re-of­fered, re-presented. The Mass re­presents Christ’s sacrifice on the Cross in an unbloody manner. Jesus Christ, really present in His human nature and, therefore, with His human will, is capable of offering Himself no less really now than He did nineteen cen­turies ago, because the heart if sacrifice is in the will. Christ’s willingness to die, His readiness to shed His Blood, is no less real now than it was when He actually died. As the Church tells us, the only reason He does not die is because, being immortal and glorified, He cannot die. But the fact that He now has an immortal Body has not deprived Him of a human free will. It is with that will that He re-offers Himself to His Father, not now to merit the grace which had been gained for us on Calvary, but to dispense the grace; to channel what had been gained; to distribute what had been won; to confer that for which He had died.

As the Real Presence is to nour­ish the faith of the priest, so the real Sacrifice of the Mass is to enable the priest to be a priest; one who sacrifices and who is willing to sac­rifice himself. A priest must live up to what his name signifies. one who surrenders himself completely as no one else on earth is expected to sur­render. This means the sacrifice of his time for the people committed to his care. It is really not his time, it is theirs. It means, too, the sacrifice of his talents, the sacrifice of his prefer­ences, conveniences, place of living and form of ministry. It means that a priest is to totally spend himself for the souls that Christ entrusted to his care.

The Church desperately needs priestly vocations, and she will get them on one condition: provided priests are what they are supposed to be, men who do not shrink from hard work, do not hesitate to un­dergo inconvenience and even pain; men whose one preoccupation is to save souls, to bring back sinners or to elevate the weak and the timid to sanctity; men who labor and ask for nothing except God’s love in return. In a word, priests who are not afraid of sacrifice; whose Mass is not only their liturgy but their life. For such priests we should pray, and beg the great High Priest to send such labor­ers into His harvest.
(Servant of God)   Fr. John A. Hardon, SJ