From “Mother of the Redeemer” 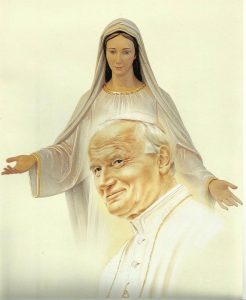 Mary’s mediation continues in the history of the Church and the world. We read that Mary “by her maternal charity, cares for the brethren of her Son who still journey on earth surrounded by dangers and difficulties, until they are led to their happy homeland.” In this way Mary’s motherhood continues unceasingly in the Church as the mediation which intercedes, and the Church expresses her faith in this truth by invoking Mary “under the titles of Advocate, Auxiliatrix, Adjutrix and Mediatrix.”

Through her mediation, subordinate to that of the Redeemer, Mary contributes in a special way to the union of the pilgrim Church on earth with the eschatological and heavenly reality of the Communion of Saints, since she has already been “assumed into heaven. “The truth of the Assumption, defined by Pius XII, is reaffirmed by the Second Vatican Council, which thus expresses the Church’s faith: “Preserved free from all guilt of original sin, the Immaculate Virgin was taken up body and soul into heavenly glory upon the completion of her earthly sojourn. She was exalted by the Lord as Queen of the Universe, in order that she might be the more thoroughly conformed to her Son, the Lord of lords (cf. Rev. 19:16) and the conqueror of sin and death.” In this teaching Pius XII was in continuity with Tradition, which has found many different expressions in the history of the Church, both in the East and in the West.

By the mystery of the Assumption into heaven there were definitively accomplished in Mary all the effects of the one mediation of Christ the Redeemer of the world and Risen Lord: “In Christ shall all be made alive. But each in his own order: Christ the first fruits, then at his coming those who belong to Christ” (1 Cor. 15:22-23). In the mystery of the Assumption is expressed the faith of the Church, according to which Mary is “united by a close and indissoluble bond” to Christ, for, if as Virgin and Mother she was singularly united with him in his first coming, so through her continued collaboration with him she will also be united with him in expectation of the second; “redeemed in an especially sublime manner by reason of the merits of her Son,”she also has that specifically maternal role of Mediatrix of mercy at his final coming, when all those who belong to Christ “shall be made alive,” when “the last enemy to be destroyed is death” (1 Cor. 15:26).”

Pope St. John Paul II   (The Mother of the Redeemer)