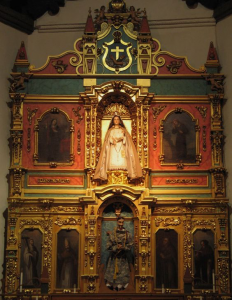 La Conquistadora, the oldest continuously venerated image of the Virgin Mary in the U.S., arrived in Santa Fe on a wagon train in 1626 with Fray Alonso de Benavides. The 30-inch statue has many different titles, all starting with Our Lady, which relate to events in her life, the life of her son, Jesus, or miracles associated with her intervention.

Our Lady of the Immaculate Conception refers to the dogma of the immaculate conception of Mary.

Our Lady of Sorrows refers to the seven sorrows she endured as the mother of Jesus.

Our Lady of San Juan de los Lagos and Our Lady of Lourdes refer to locations where miraculous events occurred through her intervention.

The statue was originally carved as an image of Our Lady of Assumption, representing Mary’s miraculous assumption into heaven.  Her maker and her country of origin remain unknown. Tree-ring dates reveal she was carved between 1448 and 1648.

In the mid-1650s, Our Lady was adopted by the Confraternity of Our Lady of the Rosary as their patroness.

At the time of the Pueblo Revolt in 1680, settlers carried her to the El Paso area. In the temporary settlement of El Real de San Lorenzo in 1686, the first existing record was made of her clothing and jewels. The list included dresses of silk and satin with gold galloon trim, strings of pearls, gold and silver earrings and a filigree cross.

She accompanied Don Diego de Vargas, friars, families and soldiers on their expedition to resettle the villa 13 years later. According to author and historian Fray Angélico Chávez, Vargas believed that she had answered his prayers to regain the city without too much bloodshed and in return he rebuilt the parish church that had been destroyed during the revolt in honor of the figure he called Nuestra Señora de la Conquista. The Fiesta de Santa Fe was created to give thanks for her role in the reconquest. She received a permanent home in what is now the cathedral in 1717.

In 1771 La Conquistadora was proclaimed patroness of Nuevo México and Queen of Heaven and the cofradía, which cares for her, vowed to hold annual church functions in her honor. These eventually included processions from her chapel in the parish church to the location north of Santa Fe where she was said to have waited during Vargas’ siege of Santa Fe.

In 1933, artist Gustave Baumann was commissioned to make a replica of the statue, La Peregrina, who stands in for La Conquistadora during visits to communities around the state.

The statue was stolen from the cathedral in 1973 by two teenage boys and was later recovered, with a stolen statue of San Miguel, from an abandoned mine shaft in the Manzano Mountains near Los Lunas.

In 1992, Archbishop Robert Sánchez proclaimed her Our Lady of Peace. The most recent restoration of the image was in 1997.

One Feast day is January 12th but there are other times of celebration.

to join the Confraternity of La Conquistadora see https://www.cbsfa.org/86