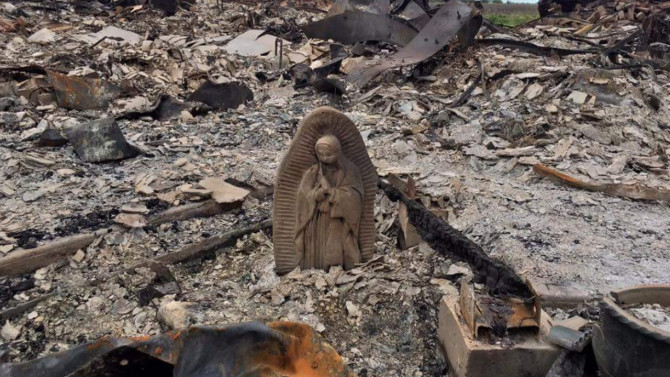 Ave Maria!  During Hurricane Harvey last year, the Virgin Mary gave a Catholic family hope in the midst of disaster.

Amid tragedy, one family found a symbol of hope.

Cidalin Rojas, whose family lives in Robstown, Texas, said tragedy struck her family when two of their homes, which sat next to each other, both burned down during Hurricane Harvey on Friday.

The family had built the homes from the ground up.

“It was the saddest feeling that we have ever had,” Rojas said.

In addition to the heartache, a resident of the town captured the fires on Facebook live.

The Rojas family had already evacuated to Laredo, Texas, but watched their homes burn down on social media.

“Watching our home and not being able to be there and knowing it was burning in front of millions on Facebook, it was heart-wrenching,” Rojas said.

The family couldn’t return to the home immediately because members of the Robstown Fire Department told them it would be unsafe.When they did return Sunday evening, they found a glimmer of comfort in the form of a Virgin Mary statue.

“They got there and they were looking through the rubble and the only thing standing was the Blessed Mother,” Rojas said.

Rojas said her family is very religious and puts much of their faith in the Virgin Mary.

When Rojas’ daughter died in 2009, they buried her in a casket surrounded by pictures of the Virgin Mary.

Finding that the statue was still standing had deep meaning for the faith-filled family.

“It was just a sign of hope. It meant a lot,” Rojas said. “The statue was outside on the lawn in the front of the house so when all three stories came down and everything fell, I can’t understand why that wasn’t buried under. We truly believe that it is our personal sign that we needed.”

Source: Virgin Mary Statue Is All That’s Left After Family’s Home Burns Down During Hurricane Harvey | Inside Edition