The Inflowering of Genazzano: City of Our Lady of Good Counsel 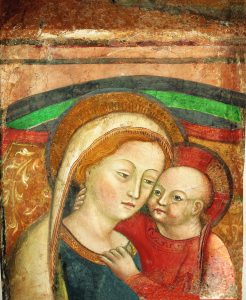 Each year, in honor of the Sacred Heart, the townspeople of Genazzano decorate the streets with elaborate carpets of flower petals. A Eucharistic procession ensues, followed by a parade of participants dressed as Biblical figures. The following videos present the masters’ individual and grand-scale accomplishments.

Regarding the history of the miraculous image of Our Lady of Good Counsel- Madonna del Buon Consiglio- the New Advent Catholic Encyclopedia writes,

“Records dating from the reign of Paul II (1464-71) relate that the picture of Our Lady, at first called “La Madonna del Paradiso” and now better known as “Madonna del Buon Consiglio”, appeared at Genazzano, a town about twenty-five miles southeast of Rome, on St. Mark’s Day, 25 April, 1467, in the old church of Santa Maria, which had been under the care of Augustinians since 1356. The venerated icon itself, which is drawn on a thin scale of wall-plaster little thicker than a visiting-card, was observed to hang suspended in the air without the slightest apparent support; thus early tradition, which furthermore tells how one might have passed a thread around the image without touching it. At once devotion to Our Lady in Santa Maria sprang up; pilgrim-bands began to resort thither; while miracles in ever-increasing numbers, of which a register was opened two days after the event, were wrought, as they still continue to be, at the shrine.”

The flower-mosaic below recalls the appearance of the miraculous image in the town.