The World needs the Cross 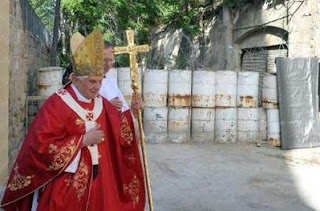 The focus of our celebration today is the Cross of Christ. Many might be tempted to ask why we Christians celebrate an instrument of torture, a sign of suffering, defeat and failure. It is true that the Cross expresses all these things. And yet, because of him who was lifted up on the Cross for our salvation, it also represents the definitive triumph of God’s love over all the evil in the world.
+
There is an ancient tradition that the wood of the Cross was taken from a tree planted by Adam’s son Seth over the place where Adam was buried. On that very spot, known as Golgotha, the place of the skull, Seth planted a seed from the tree of the knowledge of good and evil, the tree in the midst of the Garden of Eden. Through God’s providence, the work of the Evil One would be undone by turning his own weapons against him.
+
Beguiled by the serpent, Adam had foresaken his filial trust in God and sinned by biting into the fruit of the one tree in the garden that was forbidden to him. In consequence of that sin, suffering and death came into the world. The tragic effects of sin, suffering and death were all too evident in the history of Adam’s descendants. …
+
As a punishment for their sin, the people of Israel, languishing in the desert, were bitten by serpents and could only be saved from death by looking upon the emblem that Moses raised up, foreshadowing the Cross that would put an end to sin and death once and for all. We see clearly that man cannot save himself from the consequences of his sin. He cannot save himself from death. Only God can release him from his moral and physical enslavement. And because he loved the world so much, he sent his only-begotten Son, not to condemn the world – as justice seemed to demand – but so that through him the world might be saved. God’s only-begotten Son had to be lifted up just as Moses lifted up the serpent in the desert, so that all who looked upon him with faith might have life.
+
The wood of the Cross became the vehicle for our redemption, just as the tree from which it was fashioned had occasioned the Fall of our first parents. Suffering and death, which had been a consequence of sin, were to become the very means by which sin was vanquished. The innocent Lamb was slain on the altar of the Cross, and yet from the immolation of the victim new life burst forth: the power of evil was destroyed by the power of self-sacrificing love.
+
The Cross, then, is something far greater and more mysterious than it at first appears. It is indeed an instrument of torture, suffering and defeat, but at the same time it expresses the complete transformation, the definitive reversal of these evils: that is what makes it the most eloquent symbol of hope that the world has ever seen. It speaks to all who suffer – the oppressed, the sick, the poor, the outcast, the victims of violence – and it offers them hope that God can transform their suffering into joy, their isolation into communion, their death into life. It offers unlimited hope to our fallen world.
+
That is why the world needs the Cross. The Cross is not just a private symbol of devotion, it is not just a badge of membership of a certain group within society, and in its deepest meaning it has nothing to do with the imposition of a creed or a philosophy by force. It speaks of hope, it speaks of love, it speaks of the victory of non-violence over oppression, it speaks of God raising up the lowly, empowering the weak, conquering division, and overcoming hatred with love.
+
A world without the Cross would be a world without hope, a world in which torture and brutality would go unchecked, the weak would be exploited and greed would have the final word. Man’s inhumanity to man would be manifested in ever more horrific ways, and there would be no end to the vicious cycle of violence.
+
Only the Cross puts an end to it. While no earthly power can save us from the consequences of our sins, and no earthly power can defeat injustice at its source, nevertheless the saving intervention of our loving God has transformed the reality of sin and death into its opposite. That is what we celebrate when we glory in the Cross of our Redeemer. Rightly does Saint Andrew of Crete describe the Cross as “more noble, more precious than anything on earth […] for in it and through it and for it all the riches of our salvation were stored away and restored to us”.
+