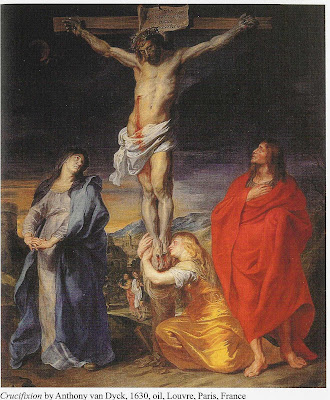 Mary present in the sacrifice of the Cross.

Throughout Jesus’ earthly life his Mother Holy Mary fulfilled the Divine Will by looking after him with loving care – in Bethlehem, in Egypt, in Nazareth. She looked after him in all his ordinary needs as any mother would do for her child, and also in extraordinary necessities, such as when his life was in danger. The Child grew up with Mary and Joseph in an atmosphere full of sacrifice and cheerful love, secure care and protection and work.

Later on, during his public life, Mary rarely followed him in a physical way, but she knew where he was at each moment, and news of his miracles and his preaching reached her. Sometimes Jesus went to Nazareth and while He was there spent more time with his Mother. The majority of his disciples would have known her since the time of the wedding at Cana of Galilee. Apart from the changing of the water into wine, in which she played such an important part, the Evangelists do not record her presence on the occasion of any other miracle. Nor was she present when the people were full of enthusiasm over her Son. She is not to be seen amid the palms of Jerusalem, nor at the hour of the great miracles – except at the first one at Cana.

But she doesn’t escape from the contempt at Golgotha; there she stands, the Mother of Jesus, beside his Cross. She stays as a rule in Nazareth, in per­fect union with her Son, pondering in her heart all that is happening; but in the hour of sorrow and desertion, Mary is there.

God loved her in a unique and singular manner. Nevertheless, He did not spare her  the ordeal of Calvary, making her share in suffering no one else has ever experienced except her Son.  Perhaps she could have stayed quietly at  home in the consolingly agreeable company of the women; after all, there was nothing she could do, and her presence neither avoided nor relieved the sufferings and humiliations of her Son. But she was there, nevertheless. She stayed with Christ for the same reason as any mother stays beside the deathbed of her son, instead of going out to try to distract herself when she sees that she can neither keep him alive nor stop his suffering. No, the Virgin Mary identified herself with her Son; her love made her suffer with Him.

Little by little she kept getting nearer to the Cross; finally, the soldiers must have allowed her to stay very close. She looks at Jesus, and her Son looks at her. In the closest union, she offers her Son to God the Father, co-­redeemmg with Him. In communion with her suffering and agonizing Son, she put up with pain and almost death. As a Mother, she abdicated her rights over her Son, in order to obtain the salvation of mankind, and to satisfy divine jus­tice in as much as it depended on her. She immolated her Son, in such a way that it can rightly be said that she redeemed the human race with Christ.

The Virgin Mary not only accompanied Jesus but was actively and intimately united to the sacrifice which was offered on that first altar. Voluntarily she shared in the redemption of the human race, thereby fulfilling the fiat she had pronounced years before in Nazareth. And so we may consider that in each Mass, the very centre and heart of the Church, we find Mary. On many occasions this fact will help us to live the Eucharistic Sacrifice better, by unit­ing our sacrifice, which also has to be a holocaust, to the sacrifice of Christ, feeling ourselves to be on Calvary, very close to Our Lady.

From the Cross, Jesus entrusted his Mystical Body, the Church to Mary in the person of Saint John. He knew that would need a Mother to protect us all the time; someone to lift us up and intercede for us. From that moment, she guarded and will guard it (the Church) with the same fidelity and the same effort as that with which she guarded her Firstborn – from the crib at Bethlehem, through Calvary, until the Cenacle of Pentecost, where the birth of the Church took place. Mary is present in all the vicissitudes of the Church. In a particular way she is united to the Church in the most difficult moments of her history. Mary appears particularly close to the Church at such times because the Church is always like her Christ – first her Child, then the Crucified and then the Risen Jesus.

The Virgin Mary intercedes so that God will impress on the souls of Christians the same zeal that He placed in hers, namely, to co-redemptive desire that all men may become once more God’s friends. The faith, hope, and ardent charity of the Virgin Mary on the summit of Golgotha, which make her Co-redemptrix in an eminent way, are also an invitation to us to grow, to be strong humanly and supernaturally in external difficulties and to persist without getting discouraged in our apostolate although it may sometimes appear that there are no results, or that the outlook is darkened by the power of evil.

Let us struggle against this routine, against this just dragging along monotonously, against this conformism which amounts to inactivity. Look at Christ on the Cross: look at Mary next to the Cross: before her gaze she is confronted with a terrifying outburst of insults, mock­ery, treachery … but Christ, and seconding this redemptive action, Mary, continue strong, persevering, full of peace, with optimism in the suffering, fulfilling the mission entrusted to them by the Trinity. It is a sharp reminder to each one of us to be other Christs, and a reminder that Christ fulfils his mission at the time of suffering, of fatigue, and of the most terrible contradiction.

I want to advise you to turn your eyes towards the Virgin Mary, and to ask her, for yourself and for others, that we may have absolute confidence in the redemptive action of Jesus, and that like you, Mother, we  should want to be Co-redeemers. To share the Redemp­tion, to co-operate in the sanctification of the world, to save souls for eternity: could there be a greater ideal to fill one’s life? The Blessed Virgin co-redeems now with her Son on Calvary, but she also did so when she pronounced her fiat on receiving the Angel’s message; she did so in Bethlehem, she did so during the time she remained in Egypt and in every day of her ordinary life in Nazareth … Like her we can be co-redeemers at all hours of the day, if we fill them with prayer, if we work conscientiously, if we live in charity with those we meet in our jobs, in the family if we offer up calmly the contradictions each day  brings with it.

Mary and the Mass

When Jesus saw his mother, and the disciple whom he loved standing near, he said to his mother, “Woman, behold, your son!” It was Jesus’ last gift before his death: he gave us his Mother as our Mother.

Since then Christ’s disciple has something of his own: he has Mary as his Mother. Her place as Mother in the Church will be for always: And from that time the disciple took her to his home.That is Jesus’ hour, when with his redemptive death he inaugurates a new era that will last till the end of time.

Since then, it we want to be Chris­tian we have to be Marian; to be a good Christian it is necessary to have a great love for Mary. The work of Jesus can be summarized in two marvelous facts: He has given us divine filiation, making us children of God, and He has made us children of Mary.  The Virgin Mary sees her Son, Jesus, in each Christian. She treats them as if Christ himself were in our place. How then will she forget us when she sees us in need? What will she not obtain for us from her Son? We can never imagine, even remotely, how much Mary loves each one of us.

Let us get used to finding Mary while we celebrate or participate in the Holy Mass. There, in the Sacrifice of the Altar, the participation of Our Lady evokes the silent reserve with which she walked the roads of Palestine. The Holy Mass is an action of the Trinity: by the Will of the Father, co-operating with the Holy Spirit, the Son offers himself in a redemptive oblation In this unfathomable mystery, one notices, as if shrouded in veils, the most pure face of Mary, Daughter of God the Father, Mother of God the Son, Spouse of God the Holy Spirit.

Treating with Jesus in the Sacrifice of the Altar neces­sarily brings with it intimacy with Mary, his Mother. Who­ever finds Jesus also finds Mary Immaculate and, as hap­pened to those holy persons, the Three Wise Men, who went to adore Christ: “and going into the house, they saw the child with Mary his mother“ With her we can offer our whole life, all our thoughts, desires, works, affections, actions, loves, identifying ourselves with the same senti­ments which Christ Jesus had.

Holy Father, we can say in the intimacy of our heart, and we can repeat this interiorly during the Holy Mass, through the Immaculate Heart of Mary I offer you, your beloved Son Jesus, and also myself in him, with him and through him, for all his intentions and in the name of all creatures. To celebrate or attend the Holy Sacrifice of the Altar properly is the best service we can offer Jesus, his Mystical Body and the whole human race. Next to Mary, in the Holy Mass we are particularly united with the whole Church.