Bl. Teresa of Calcutta’s Vision of the Crucified and His Holy Mother

In 1947 Mother Teresa was shown a vision in three parts. In the first scene she saw the painful plight of the poor and the yet greater inner poverty that was hidden beneath their material poverty…they were reaching out to her.

In the second scene, Mother Teresa saw the same crowd of the poor…Our Lady was there in the midst of them and Mother Teresa was kneeling at her side; she heard her say:

“Take care of them…they are mine…bring them to Jesus…carry them to Jesus…fear not…teach them to say the rosary…the family rosary, and all will be well…fear not…Jesus and I will be with you and your children.”

In the third scene was the same crowd again and they were covered with darkness. There in the midst of an anguished crowd that seemed unaware of His presence, was Jesus on the Cross. Our Lady was before Him…and Jesus said to Mother Teresa:

“I have asked you…she, My Mother has asked you. Will you refuse to do this for me…to take care of them, to bring them to Me?” 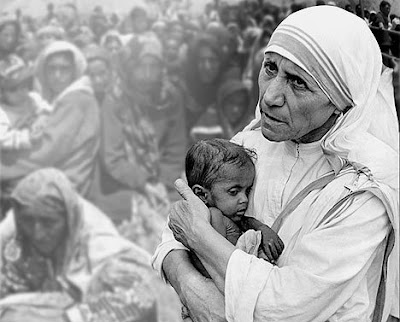 Mother Teresa’s entire life was directed toward returning the Father’s measureless love poured out in Jesus crucified, present in the Eucharist, dwelling in her heart and hidden in the needy.

“The slap on the face, the spitting on His face, the crowning with thorns, the scourging, the removing of His clothes, the crucifixion…putting the Cross in the center, showing that He was worse than the other two. The burial in somebody’s grave, all these and many others, especially the terrible longing to be loved, the terrible lonliness, the terrible feeling of pain for His Mother. All, all these are the love with which He loved you and me.” (Mother Teresa)

One sees in these visions the central and defining role Our Lady would play in every aspect of Mother Teres’as life and work. …Our Lady becomes a bridge both between Mother Teresa and the poor who cried out to her and between the poor and the crucified Jesus Who thirsted for them, Who yearned to love and be loved by them.

(excerpts from “Mother Teresa: In the Shadow of Our Lady” by Joseph Langford, MC)