Blesseds Francisco and Jacinta Marto, children of Fatima, Feast day is February 20th.
Our Lady appeared to three small children in Fatima in 1917. She told two of them, the brother and sister, that they would soon go to heaven but Francisco would have to pray many rosaries. These little children had seen a vision of hell and did penance in their young lives.
Francisco would spend much time in prayer at the tabernacle of the Church. He longed for Heaven and was thrilled at the thought of being able to see Jesus and Mary forever. In his last illness, he continually made the sacrifice of taking any medicine or food which was given him, no matter whether he liked it or not, without complaining. As his illness progressed, he could no longer say his prayers out loud, but he continued to pray “with his heart.” At Francisco’s request, the parish priest came to give him his first Communion, which he had not yet received. It would be his last Communion – Francisco died peacefully the next day, April 14, 1919.  He was only 10 years of age.

Jacinta was attacked by the Spanish plague almost at the same time as her brother Francisco.  She too spoke of nothing else than of reciting the Rosary and offering sacrifices for sinners.  Towards the end of January, 1920, Jacinta was taken to Lisbon to be operated upon for a persistent lung infection.  There she immediately impressed all by her candor, her modesty, her great patience, her perfect submission, her continued prayer and ardent love for Holy Communion which she received every day except when prevented by illness.  Many doctors came to examine Jacinta; their only thought was of science and medicine.  They discounted the influence God might have on the condition of the patient.  The little girl did not hesitate to set them straight on the matter, pointing out the cause of their frequent failures.  “Pity doctors.  They have no idea what awaits them.  Doctors do not know how to treat patients with success because they have no love for God.”

The Blessed Virgin continued to encourage this heroic virtue by her apparitions.  One day, when Mother Godinho, Superior of the orphanage, came to see her, Jacinta asked her quite naturally:  “Could you come back a little later?  I am expecting the Blessed Virgin any minute!”  The effects of these visits from heaven manifested themselves not only in the supernatural wisdom of the child’s words, but also in her predictions.

What ardor did not this child of ten preach amendment of life, not only to sinners, but also to faithful souls!  How she insisted on flight from sin, the practice of the Christian virtues and penance!

“Oh!” she said to the Superioress of the Orphanage in Lisbon, “if men only knew what eternity is, how they would make all possible efforts to amend their lives!

Dear Godmother (she addressed the Superioress in this way), mortification and sacrifice give great pleasure to Our Divine Lord!  Oh! Fly luxury! Fly riches! Love holy poverty and silence.

Be very charitable even towards the wicked!  Never speak evil of anyone and avoid those who do.

Be very patient because patience leads to heaven.

Pray much for sinners!

Pray much for priests, for Religious, for Governments! The sins of the world are too great!

The sins which lead most souls to hell are sins of the flesh! Certain fashions are going to be introduced which will offend Our Lord very much. Those who serve God should not follow these fashions. The Church has no fashions; Our Lord is always the same.

Many marriages are not good; they do not please Our Lord and are not of God. . . . Oh!  Men must do penance!  If they amend their lives Our Lord will still pardon the world; but if they do not, the chastisement will come!

Priests should occupy themselves only with the affairs of the Church!  They must be pure, very pure.”

Mother Godinho asked her: “Do you know what it means to be pure?” “Yes, Yes. I know to be pure in body means to be chaste, to be pure in mind means not to commit sins; not to look at what one should not see, not to steal or lie, and always to speak the truth, even if it is hard.

The disobedience of priests and of religious to their Superiors and to the Holy Father offends Our Lord very much!

When Jacinta was at the orphanage in Lisbon, before she was sent to the hospital, she spent every possible moment in the chapel kneeling with her eyes riveted on the tabernacle.  Seeing people in church being irreverent toward the Blessed Sacrament upset her greatly.  She stated that Our Lady does not want us to talk in church.  One day she heard visitors discussing faults of a certain priest who had been forbidden to say Mass.  Jacinta began to weep for sorrow and she said people should not talk about priests but they should rather pray for them.

February 20, 1920 came.  Jacinta seemed about the same; she might last a few more days, she might go any moment.  About six o’clock in the evening the child said she was not feeling well and she wanted to receive the last rites of the Church.  A priest was called, heard her confession and promised to bring her Communion in the morning.  Jacinta asked him to bring it immediately but he could see no reason for alarm.  She insisted that she was to die shortly.  At ten-thirty, she died peacefully without having her wish fulfilled.  She had just turned ten years old.  The news of the child’s death spread fast through the city and crowds flocked to the church to see the body.

The undertaker testified that he never before nor after had a case like Jacinta’s. “It seems to me that I can still today see the little angel.  Laid in the casket she seemed to be still alive, in her full beauty with rosy cheeks and lips.  I have seen many bodies in my business, young and old.  Never did a thing of this sort happen to me before nor since.”  The pleasant aroma that exhaled from her body cannot be explained.  The worst unbeliever could not question it . . .  Though the child had been dead three days, the aroma was like a bouquet of flowers.  Fifteen years after Jacinta’s death, her body was transferred to the cemetery of Fatima. When her casket was opened on this occasion her little body was still whole and incorrupt. 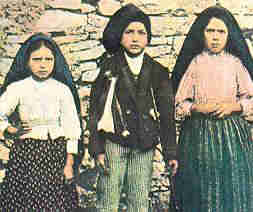