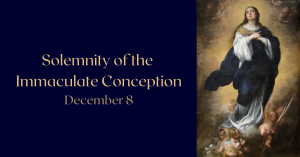 On the Dogma of the Immaculate Conception from Pope Pius IX: “We declare, pronounce and define that the doctrine which holds that the most blessed Virgin Mary, at the first instance of her conception, was preserved immune from all stain of sin, by a singular grace and privilege of the omnipotent God, in view of the merits of Jesus Christ, the Savior of the human race, was revealed by God and must be firmly and constantly believed by all the faithful.

Dr. Mark Miravalle wrote: This preservation from original sin for Mary was nonetheless a singular privilege. The definition testifies that the Immaculate Conception was a unique privilege given by the all-powerful God to Mary alone. This free gift from God prepared Mary to be the stainless Mother of the God made man. And it fittingly allowed Mary to give Jesus an immaculate human nature, identical to her own, which respects the law of motherhood. For we know that God the Son could not be united to a stained fallen nature when He became man. How appropriate it is that Mary could give Jesus an immaculate nature as a mother rightly passes onto her offspring her identical nature.