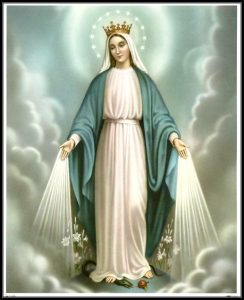 Our kind Savior… Had foreseen the fears that would arise in us because of His dignity and position as Judge, in despite all His goodness. That is why, without ceasing to be our Advocate and Mediator before God, He condescended to establish between Himself and ourselves a mediator and advocate whom we could fearlessly approach. For, as our mother, she can obtain everything from God. But also, as His Mother, she pleads successfully with her Son because she was the Mother who had nourished Him. Her power of intercession with Him is as great as His pleading with His Father, to whom He shows His Heart and wounds.

The fathers of the church are unanimous and confirming that this truth is in the economy of God’s divine plan… That is why the Redeemer left the ransom of the human race in Mary’s hands. He wanted everything to come through her mediation. She is the viaduct through which water flows to us, the ladder leading us to God, the door opening onto His goodness, the means by which all the merits of the Divine Head come to the body of the church…As the new Esther, she has been found acceptable in the Lord sight, for all men in His empire have been given to her. She holds the scepter of mercy, while her Son remains the King of Justice.