The Supreme Pontiff: Our Bridge

“But in order that you should have life, it is not enough that My Son should have become the Bridge, unless you pass over this Bridge.” God the Father to St. Catherine of Siena in the Dialogue 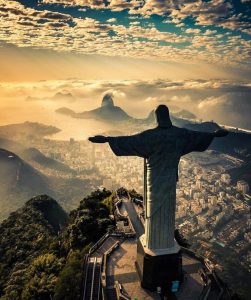 “The Holy Spirit shall come upon thee, and the power of the Most High shall overshadow thee. And therefore also the Holy which shall be born of thee shall be called the Son of God.” The Virgin replies: “Behold the handmaid of the Lord; be it done to me according to thy word”. (Lk 1: 36-38)

At this moment, the Word is made flesh. The Word is forever united, by an ineffable union, to our humanity. Through the Incarnation, the Word enters into our race: He becomes authentically one of ourselves, like unto us in all things, excepting sin. He can, then, become High Priest and Mediator, since being God and Man He can bind man to God: He was taken from among men.

In the Holy Trinity, the Second Person, the Word, is the infinite glory of[the Father, His essential glory: the brightness of his glory and the figure of his substance. (Heb. 1:3) But as Word before the Incarnation, He does not offer sacrifice to His Father. Why is this? Because sacrifice supposes homage and adoration, that is to say the acknowledgment of our own abasement in presence of the Infinite Being; the Word being in all things equal to His Father, being God with Him and like Him, cannot then offer Him sacri­fice. Christ’s Priesthood could only begin at the moment when the Word was made flesh. At that moment when the Word became Incarnate, He united in Himself two natures: the divine nature whereby He was able to say: “I and the Father are one” (Jn. 10:30), one in the unity of the Divinity, one in equality of perfections; the other, the human nature by reason of which He said: “The Father is greater than I” (Jn.14:28). It is therefore inasmuch as He is God-Man that Jesus is Pontiff

Learned authors derive the word ‘pontiff’ from pontem facere: to establish or to make a bridge. Whatever be the value of this etymology, the idea is just when applied to Christ.

In the Dialogue of St. Catherine of Siena, we read that God the Father, vouchsafed to explain to her how, by the union of the two natures, Christ threw a bridge over the abyss that separated us from heaven: “I would that thou shouldst look at the Bridge that I have built for thee in My Only-begotten Son, and that thou shouldst see the greatness thereof for it reaches from heaven to earth, that is, the greatness of the Di­vinity is joined to the earth of your humanity … That was necessary in order to restore the road which was broken and make it possible for man to pass through this world’s bitterness and attain (eternal) life; but the bridge could not be made of earth large enough to span the abyss and reach eternal life, since the earth of human nature was incapable of itself to satisfy for sin and remove the stain of Adam’s sin which has cor­rupted and infected the whole human race. It was, then, necessary to join human na­ture with the height of His nature, the Eternal Deity, so that it might satisfy for the whole human race…So the height of the Divinity, humbled to the earth of  humanity, built the bridge and made the road … But in order that you should have life, it is not enough that The Son should have become the Bridge, unless you pass over this Bridge.”

The sacrifice of this one Pontiff is on a par with His priesthood; it was likewise the moment of His incarnation that Jesus inaugurated it.