A Franciscan Doctor of the Church 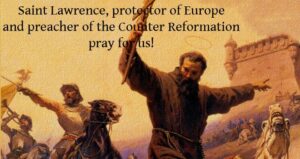 Saint Lawrence’s love for the Holy Sacrifice of the Mass was extraordinary. Especially in his later years he spent unusually long time at the altar. The length of his Masses was most evident on the feasts of Our Lord and the Blessed Virgin Mary. The longest Mass he ever offered was in 1618 on the last Christmas of his life. This Mass took 16 hours! His Masses often lasted six, eight, and 10 hours during these years. Even when he was quite sick, his Mass would last for several hours.

Nothing could keep Saint Lawrence from saying Mass. One morning he walked 20 miles while fasting in order to reach a place where he could offer Mass after having walked 20 miles the preceding day for the same reason. During his Mass it would shed many tears and his face showed a variety of emotions, ranging from great sorrow to intense joy.

If there is one thing to remember about Saint Lawrence of Brindisi, it is that he was one of the greatest preachers in the history of Christianity. Those who knew him considered him to be the greatest preacher of his time. He has a natural endowment of a great orator: a good voice, an imposing appearance and a photographic memory. He tells us that when he stood in the puppet, his sermon was there before him, completely clear in his mind. But Saint Lawrence also possess the personal magnetism that would attract people to Him.

From the book “The 33 Doctors of the Church” bu Fr. Christopher Rengers, OFM Cap.

St. Lawrence was declared a Doctor of the Church by Pope St. John XXIII and his feast day is July 21st