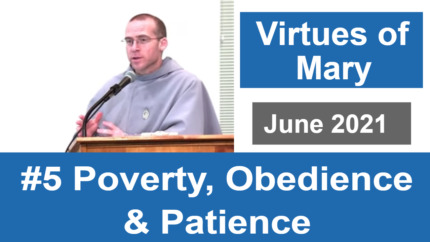 Fr. Ignatius Manfredonia on Mary's virtues of poverty, obedience and patienceand chastity, what these virtues are, and how this relates to our own journey to the virtuous life.

This is the last of five talks for our "Virtues of Mary" retreat June 18-20, 2021 at the Mother of the Redeemer Retreat Center in Bloomington, Indiana

Poverty is a virtue and one of the Evangelical counsels

Not an excuse for communism. It is only a virtue if you do so willingly not by government decree.

Our Lord and Lady in St Joseph all lived in poverty and he asked the rich young man to give away all his wealth.

Married Joseph who was not rich

Could not find a room at the inn

Everest is the opposite of poverty and very common in America and in other wealthy countries.

Well if it's not bad but can be corrupting. You can use your wealth to do a lot of good.

We are not all called to follow the rule of poverty is in the religious life but we should follow a love of poverty to despise because of the world and love the good of God alone.

Blessed are the poor and spirit for theirs is the kingdom of God.

Material poverty is a good aid to practice the spiritual poverty

Mary gave away the gifts of the wise men to the poor evidenced by the fact that they offered a poor person’s offering at the temple.

St Francis made poverty Central to his rule in spirituality, lady poverty.

Gordon Gekko Wall Street greed is what made America great.

Follows her humility. Recognizing God as the ultimate authority and our lack of authority. Therefore being obedient shows humility. Whereas Satan's pride led him to say, I will not serve.

Let it be done to me according to thy word.

I am the handmaid of the Lord

In contrast to Eve’s disobedience, and thus undid the bad that the first Eve did with the first Adam and as the new Eve worked in cooperation with her son to redeem us.

Because of her Immaculate Conception, she had no internal obstacles to following the will of God and thus obeyed promptly

St Irenaeus and her cooperation in redemption

Thus the fulfillment of scripture came through a decree and obedience to it of a pagan emperor.

Mary’s obedience to St Joseph including the flight to Egypt, despite that she had the higher dignity as the mother of God and immaculate conception.

If the soldiers did not nail Jesus to the cross then Mary would have done it herself says,.    Since she was more obedient and humble than Abraham who was willing to do the same.

What we do is not as important as is it the will of God. So if we are mothers and are spending our life like a monk then we are not pleasing to God since we are not fulfilling our duties.

Obedience is another virtue that is hard to follow especially for Americans that cherish Liberty and freedom. But obedience to God will set us free which is emphasized by John Paul II. Being free to do the will of God, free to live the truth. Freeze Us from slavery to the devil and to our passions, addictions, and bad habits. Saints are maximally free and precisely because they’re not controlled by their passions and base desires.

Pro-choice is that real freedom when really it is a choice that is made under some sort of compulsion from boyfriend or parents or friends and more due to a lack of control?

Patience is very much tied to charity. Luke 21:19 in patience you will possess your souls.

Woman, what is it to me? the wedding feast of Cana

Mary is the Queen of Martyrs the model of patience

A patient person is one who suffers but suffers well. As we grow in patience we are being perfected and being sanctified. If this purification does not happen in this world, then it will in the next one, purgatory.

Red Martyrs shed their blood but white martyrs practice patience, both lead to heaven and to great eternal rewards.

Mary had no need for perfection, her practice of patients was purely gratuitous for our benefit. And this made it even more meritorious because it was done through pure love.

This is one of the reasons that St Francis emphasized going to Mary which is the white ladder of patience as opposed to the red ladder which is one of pure sacrifice.

Sufferings are not for their own sake but for growing closer to God a greater good than what is sacrificed. The example of Fatima children are asked to suffer, which sounds bad but the greater good is worth it. Pleasure is not bad but it’s not the best.