Fullness of Grace for the Mother of God 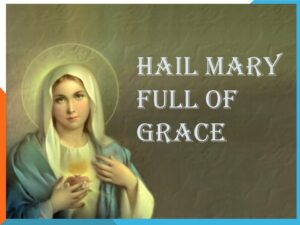 The reason why Mary was given a fullness of grace from the first instant was that she might be able to conceive the Man-God in holiness. By uttering her fiat with the utmost generosity on the day of the Annunciation in spite of the sufferings which she knew had been foretold of the Messiah, it was given her, too, that she might bring forth her Child while remaining a virgin and that she might surround Him with the most motherly and most holy devotion.

It was given her, finally, that she might unite herself to Him in closest conformity of will, as only a most holy mother can, during His hidden life, His apostolic life, and His suffering life and that she might utter her second fiat most heroically at the foot of the cross, with Him, by Him, and in Him.

The divine maternity postulates intimate friendship with God. Since a mother is bound both by a law of nature and an express precept to love her son, and he to love her, Mary and Jesus love each other mutually; and since the maternity in question here is supernatural, the love must be of the same order. But this means that it is a sanctifying love, since by the fact that God loves a soul, He makes it lovable and sanctifies it.

There is thus the most complete conformity between the will of Mary and her Son’s oblation which was, as it were, the soul of the sacrifice of the Cross. Finally, she was predestined from all eternity to the highest degree of glory after Jesus, The reason is that she was predestined first of all to be His most worthy Mother, and to retain that title during eternity after having enjoyed it in time.