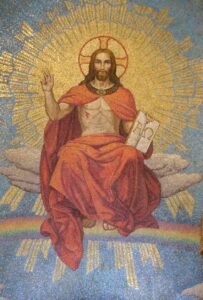 Pope St. John Paul wrote: THE REDEEMER OF MAN, Jesus Christ, is the centre of the universe and of history. To Him go my thoughts and my heart in this solemn moment of the world that the Church and the whole family of present-day humanity are now living …We also are in a certain way in a season of a new Advent, a season of expectation: “In many and various ways God spoke of old to our fathers by the prophets; but in these last days He has spoken to us by a Son…”, by the Son, His Word, who became man and was born of the Virgin Mary.

This act of redemption marked the high point of the history of man within God’s loving plan. God entered the history of humanity and, as a man, became an actor in that history, one of the thousands of millions of human beings but at the same time Unique! Through the Incarnation God gave human life the dimension that He intended man to have from his first beginning; He has granted that dimension definitively-in the way that is peculiar to Him alone, in keeping with His eternal love and mercy, with the full freedom of God-and He has granted it also with the bounty that enables us, in considering the original sin and the whole history of the sins of humanity, and in considering the errors of the human intellect, will and heart, to repeat with amazement the words of the Sacred Liturgy: “O happy fault… which gained us so great a Redeemer!”

Excerpted from the Encyclical