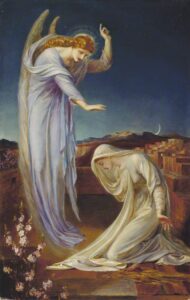 Reflecting on the circumstances of the mystery of the Annunciation, we discover in Mary the most sublime qualities. What glory for her to have been called to take part in the work of the Incarnation of the Word, the grandest of the divine works! And what virtues her example teaches us!

To whom does he go? Ah! had the world known of the celestial messenger’s coming to earth, it would have sought among the rich and the powerful for the happy mortal to whom he bore the grand message, because the world willingly believes that perfection is found in greatness. But the angel goes to a Virgin of fifteen, humble and unknown, legally espoused to a poor artisan, dwelling in a poor home, in a town despised and ignored. He goes to Mary! What! So much preparation for this unknown Maiden! Yes. Worldly prestige soon comes to naught and human pride is confounded. We see only what shines, we value only gold and diamonds. Ah! At the General Judgment they will be trodden under foot like vile stones, and hell will be paved with them.

The angel goes to a Virgin. God admits only pure souls to intimacy. He pardons the sinner, but He unites Himself only to purity.

The angel is the first to salute. He is, indeed, the less worthy of the two. Mary is sovereign here, and since the Three Divine Persons are awaiting an answer, she holds in her hands the fate of the world. Ah, how powerful is that lowly maiden!

Hail, Full of Grace! Among all the daughters of Eve, Mary alone is full of grace. We are full of the miseries of original sin. Mary is pure as the sun. God formed her of special earth, and fashioned her with singular care.

The Lord is with thee. Yes, for He dwells in the purity of thy heart, Mary, as in a paradise of delights, and thy virtues are so many flowers that send up to Him the sweetest perfume. At what hour did the angel appear? The Gospel does not say. Commentators think that it was about midnight, at the moment that one day ends and another begins, for Mary is the aurora which separates darkness from light. She was at that moment in prayer. She was sighing for the coming of the Messiah. We may suppose this without fear of being deceived, for God ordinarily gives to souls a prayer conformable to the grace that He designs to bestow upon them, and which prepares them for it. Let us at that solemn hour of the conception, and later at the birth of the Son of God, made flesh, pray with Mary, and in union with her adore the God who became incarnate for us.

The angel reassures Mary. It is characteristic of divine visions first to trouble, and then to give peace, whereas those from the evil one begin in peace and end in war.

“Thou shalt conceive a son, and thou shalt call his name Jesus.” Heavenly Name! Divine Name, that no man could give, that had to be brought from heaven by an angel! This Son will be powerful. He shall be called the Angel of the Great Council, the Mighty One, the Admirable. The Blessed Virgin had so great a love for virginity, which she had vowed to God, that at first she did not consent. “How shall this be done?” she asked. “I am, and I wish to remain a virgin.” What a moment! Mary holds heaven and earth in suspense. God is waiting the consent of this lowly maiden! He cannot proceed! At that instant, Mary was more powerful than God. How could the Lord endure that species of inferiority before Mary? Ah! it was because He preferred the virginity of His Mother to every other consideration!

The angel yielded to Mary in the name of God. Mary triumphs, and hears these words: “The power of the Most High shall overshadow thee; in becoming a mother, thou shalt remain a virgin.”

III. Mary replied: “Ecce ancilla Domini, Behold the handmaid of the Lord! Be it done unto me according to thy word!” word full of deep significance! O admirable word full of humility! But how much is contained in the word: Ecce! When the Church presents to us the Sacred Host, before Communion, she says: Ecce Agnus Dei! When Saint John wished to point out Our Lord to his disciples, he exclaimed: Ecce! In that word is contained the gift of one’s whole self. Behold me ready, entirely at the disposition of the Lord. There is in it a perfect act of faith.

Mary did not say: Behold the Mother of the Lord! Although she was actually His Mother at that moment. The saints are so much the humbler as God has elevated them higher. With reason, Saint Bernard could say of Mary: “She pleased the Lord by her virginity; she conceived Him by her humility.”

Let us notice how sparing Mary was of her words. She said what was strictly necessary, and nothing more. Silence and modesty are the safeguards of purity.

The Holy Spirit wrought in Mary His divine work. The consent of that lowly maiden changed the face of the earth. God entered again into His domain. He began again that converse with man much more perfect and much more lasting than in the earthly paradise.

This mystery of the Annunciation ennobles us. It brings God back to earth. It is at the same time a mystery entirely interior, a mystery of communion. In Communion, the Eucharistic Jesus be comes, in a manner, incarnate in us, and Communion is one of the ends of His Incarnation. By communicating worthily, we enter into the divine plan, we perfect it. The Incarnation prepared the way for and heralded Transubstantiation. Mary did not receive the Word for herself alone. She rejoiced that we participate in her happiness. Let us, then, unite with her when we receive Jesus Christ. Let us sing her Magnificat. The Lord, in this mystery, has done great things in her; and by coming to us, He has again done great things. Let us try to imitate her virtues, in order that Jesus Christ may find in us, as in His holy Mother, a dwelling worthy of Him.

Practice: To prohibit one’s self every word, every species of noise, every distraction, when in the presence of the Blessed Sacrament.