St. Joseph: Given the Graces Needed 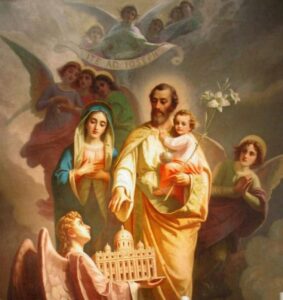 When God, destines anyone for a particular office, He gives him the graces that fit him for it. Therefore, since God chose Saint Joseph to fill the office of father over the person of the Incarnate Word, we must certainly believe that He conferred upon him all the sanctity which belonged to such an office.

Gerson says that among other privileges Joseph had three which were special to him: 1) That he was sanctified in his mother’s womb, as were Jeremias and Saint John the Baptist; 2) That he was at the same time confirmed in grace; 3) That he was always exempt from the inclinations of concupiscence – a privilege with which Saint Joseph by the merit of his purity, favors his devout clients by delivering them from carnal appetites.

Saint Joseph, shining light of chastity, preserve the angelic virtue in me!