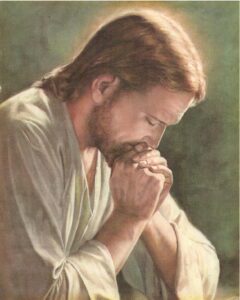 Our prayer has value only in so far as we united to that of Jesus and try to make it an echo an extension of His. The prayer of Jesus was completed in sacrifice; sacrifice was its logical accompaniment as well as its culmination: the sacrifice of nights spent in vigil; the sacrifice of penance, which for 40 days accompanied His prayer in the desert; the sacrifice of a laborious life, without having even a place to lay His head.

This rhythm of sacrifice progressively increased, until it reached its maximum in His agony in the garden and on the Cross. At this point, the prayer of Jesus became the total sacrifice of His life for the glory of the Father and the salvation of souls…

Oh Jesus, how different Your prayer is from mine! Yours is so profound and intense; mine is so superficial, distracted, and hurried. How often, alas, I allow myself to be hurried on account of my work and become so absorbed in my activity that I cannot put it aside!

Oh Lord, I want to follow Your example and leave everything at the prescribed time to become recollected in prayer. You chose to go up on a mountain to pray thus teaching me that in order to pray well, I must detach myself from the things of earth and rise above human thoughts and anxieties. When a soul is thus recollected in solitude far from creatures and from self, and desires nothing but to converse with You, O Lord, You do not delay in letting Yourself be found.