The Second Sorrow of Our Lady 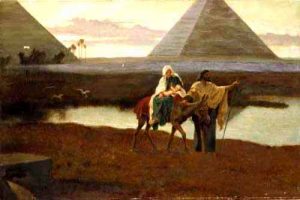 For the 7 Sorrows Rosary pray 1 Our Father and 7 Hail Mary’s: a meditation for each Hail Mary…

When the Magi had departed, behold, an angel of the Lord appeared to Joseph in a dream

He said, “Rise, take the child and his mother, and flee to Egypt, and remain there till I tell you; for Herod is about to search for the child, to destroy him.”

Joseph rose and took the child and his mother by night, and departed to Egypt, and remained there until the death of Herod.

Then Herod, when he saw that he had been tricked by the wise men, was in a furious rage.

He sent and killed all the male children in Bethlehem and in all that region who were two years old or under.

But when Herod died, behold, an angel of the Lord appeared in a dream to Joseph in Egypt.