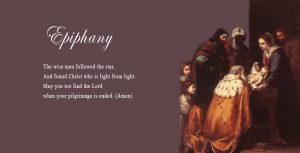 Epiphany is a season especially set apart for adoring the glory of Christ. The word may be taken to mean the manifestation of His glory, and lead us to the contemplation of Him as a king upon His throne in the midst of His court, with His servants around Him, and His guards in attendance.

At Christmas we commemorate His grace, and in Lent His temptation, and on Good Friday His sufferings and death, and on Easterday His victory, and on Ascension Thursday His return to the Father, and in Advent we anticipate His second coming. And in all of the seasons He does something, or suffers something , but on Epiphany and the days after it, we celebrate Him, not as on His field of battle, or in His solitary retreat, but as an august and glorious King.

Then only, during His whole earthly history, did He fulfill the type of Solomon, and held a court, and receive the homage of His subjects, namely, when He was an infant. His throne was His undefiled mother’s arms; His chamber of state was a cottage or a cave; the worshipers were the Wisemen of the east, and they brought presents, gold, frankincense, and myrrh . All around and about Him seemed of earth, except to the eye of faith; one note alone had He of divinity. As great men in this world are often plainly dressed and look like other men, all but as having some one costly ornament on their breast or on their brow, so the Son of Mary in a lowly dwelling, and in an infant’s form, was declared to be the Son of God most high, the Father of ages, and the Prince of Peace, by His star, a wonderful appearance which had guided the Wisemen all the way from the east even onto Bethlehem. The only display of royal greatness, the only season of majesty, homage, and glory, which our Lord had on earth, was in His infancy and youth.