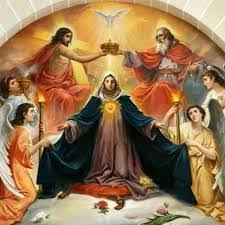 Can it be said of Mary, since her Assumption especially, and her crowning in heaven, that she shares in God’s universal Kingship in the sense that she is Queen of all creatures in subordination to Christ?

Jesus Christ is King of the universe, even as man, in virtue of His Divine Personality. But Mary as Mother of God made man belongs to the hypostatic order and shares in the dignity of her Son, for His Person is the term of her divine motherhood. Hence she shares connaturally, as mother of God, and His universal Kingship. Our Blessed Lord owes it to Himself to recognize His Mother’s title in gratitude.

Her queenship extends to the demons too who are obliged to recognize her power, for she can make their temptations cease, and save souls from their snares, and can repulse their attacks. “The demons suffer more”, says St. Grignon de Montfort, “from being conquered by the humility of Mary then by the omnipotence of God.”

Mary has a radical right to universe of queenship by the fact of her divine motherhood, but the divine plan was that she should merit also by her union with her suffering Son, and that she should not exercise it fully before being crowned queen of all creation in heaven. Her royalty is spiritual and supernatural rather than temporal and natural, though it extends in a secondary way to temporal affairs considered in their relation to salvation and sanctification. We have seen how Mary exercises her queenship on earth. She exercises it in heaven also. Thus  Mary’s queenship is truly universal.