Preparing to Meditate on the Immaculata 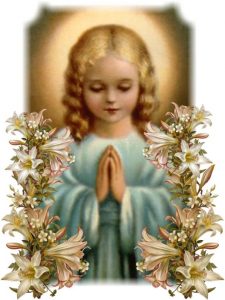 Grace as dispossession becomes response as appropriation.  Thus from another viewpoint the mystery of barren fruitfulness, the paradox of the barren mother, the mystery of virginity, becomes intelligible once more: dispossession as belonging, as the locus of new life.  Thus the doctrine of the Immaculata reflects ultimately faith’s certitude that there really is a holy Church — as a person and in a person.  In this sense it expresses the Church’s certitude of salvation.  Included therein is the knowledge that God’s covenant in Israel did not fail but produced a shoot out of which emerged the blossom, the Savior.

The doctrine of the Immaculata testifies accordingly that God’s grace was powerful enough to awaken a response, that grace and freedom, grace and being oneself, renunciation and fulfillment are only apparent contradictories; in reality one conditions the other and grants it its very existence.

Pope Emeritus Benedict XVI.  From “The Doctrine of the ‘Immaculata’.”