A November Meditation: A Saint Writes about Purgatory 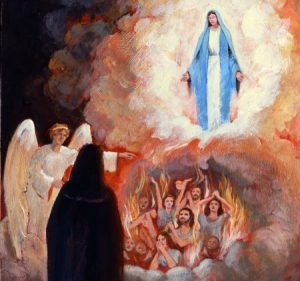 … I saw my Guardian Angel, who ordered me to follow him. In a moment I was in a misty place full of fire in which there was a great crowd of suffering souls. They were praying fervently, but to no avail, for themselves; only we can come to their aid. The flames which were burning them did not touch me at all. My Guardian Angel did not leave me for an instant. I asked these souls what their greatest suffering was. They answered me in one voice that their greatest torment was longing for God. I saw Our Lady visiting the souls in PURGATORY. The souls call her “The Star of the Sea.” She brings them refreshment. I wanted to talk with them some more, but my Guardian Angel beckoned me to leave. We went out of that prison of suffering. [I heard an interior voice] which said, My mercy does not want this, but justice demands it. Since that time, I am in closer communion with the suffering souls. (Diary, 20)

Once I was summoned to the judgment [seat] of God. I stood alone before the Lord. Jesus appeared such as we know Him during His Passion. After a moment, His wounds disappeared except for five, those in His hands, His feet and His side. Suddenly I saw the complete condition of my soul as God sees it. I could clearly see all that is displeasing to God. I did not know that even the smallest transgressions will have to be accounted for. What a moment! Who can describe it? To stand before the Thrice-Holy God! Jesus asked me, Who are you? I answered, “I am Your servant, Lord.” You are guilty of one day of fire in PURGATORY. I wanted to throw myself immediately into the flames of PURGATORY, but Jesus stopped me and said, Which do you prefer, suffer now for one day in PURGATORY or for a short while on earth? I replied, “Jesus, I want to suffer in PURGATORY, and I want to suffer also the greatest pains on earth, even if it were until the end of the world.” Jesus said, One [of the two] is enough; you will go back to earth, and there you will suffer much, but not for long; you will accomplish My will and My desires, and a faithful servant of Mine will help you to do this. Now, rest your head on My bosom, on My heart, and draw from it strength and power for these sufferings because you will find neither relief nor help nor comfort anywhere else. Know that you will have much, much to suffer, but don’t let this frighten you; I am with you. (Diary, 36)