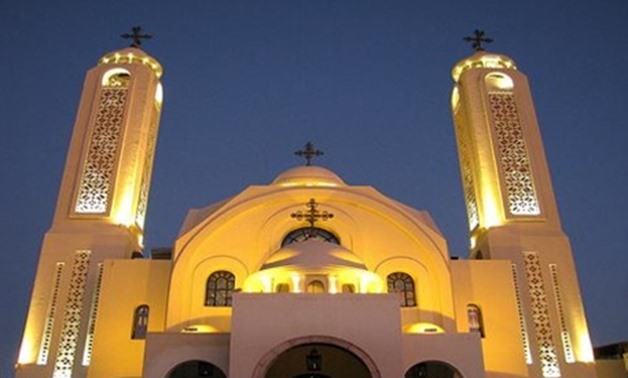 Ave Maria!  Pope Tawadros II has just celebrated the 50th anniversary Mass commemorating the Virgin Mary’s appearance over an Orthodox church in Zeitoun, Cairo, an apparition approved both by the Coptic Church and by the local Syrian Catholic Patriarch.

This apparition of the Virgin Mary is to this date the most public apparition in history, as over a million people of all religious backgrounds saw her at Zeitoun over the course of two years.  She was filmed and photographed by the international press, and stories ran about the apparition even in secular papers worldwide.

In his homily, Pope Tawadros II interpreted Mary’s appearance as a consolation to Egyptians on account of their recent defeat at the hands of Israel in 1967.  Other Copts have interpreted the apparition as a preparation for the fierce persecutions Christians have endured in Egypt in subsequent decades.  The Virgin Mary herself was completely silent throughout each of her mysterious but extremely public appearances at Zeitoun.

On the occasion of the 50th anniversary of the great apparition of Virgin Mary in in Egypt, Pope Tawadros II of Alexandria said that the historical event was a message of love from God to Egyptians.

The apparition of the Virgin in Egypt in 1968 was a message of condolence to all Egyptians following the defeat of the Egyptian army to Israel in June 1967, Pope Tawadros said during his speech on Thursday. “The country was in a difficult situation, but God bestowed his love on all Egyptians,” he added.

Pope Twadros illustrated that the holy virgin kept on appearing intermittingly over a period of two years, adding that her appearance in Egypt was accompanied by several miracles that were hailed and witnessed by millions around the world.

The Pope continued: “The Egyptian government then decided to allocate the land facing the church at which Virgin Mary appeared to establish a great cathedral named after her.”

Al-Zaitoun district was one of the key stops of the Holy Family’s journey.

“There are people living among us who witnessed the apparition of Virgin Mary; the church is still one of the most important and most visited places for Egyptians and tourists,” the pope concluded.

In 2011, Egypt also witnessed another remarkable sighting of the Virgin at a Coptic Orthodox Church in Warraq Island, Cairo, which came following a bomb attack that targeted the Alexandria-based Saints Church of St. Mark & Pope Peter on Christmas eve; the attack killed about 21 Copts.