Mary, The Ark of the New Covenant 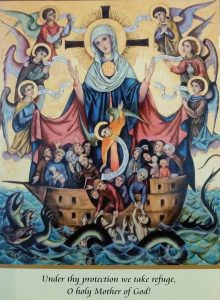 Of all the Marian symbols in the Old Testament, certainly the Ark of the Covenant enjoys preeminence. One of the readings used in the revised liturgy of Vatican II for the solemnity of Mary’s Assumption body and soul into heaven treats of the Ark of the Covenant. Throughout the centuries, Christian peoples have venerated Mary under the title of Foederis Arca (Ark of the Covenant) in the Litany of Loreto. In fact, the Ark was the place par excellence of God’s presence. The Jews even came to consider the Ark as God Himself (Num 10:35), and God’s presence was seen between the cherubim placed above the Ark. But the Ark was only a symbol. Mary, instead, is the reality. In her, God was really present, so much so as to become her Son. Finally, in the mystery of Mary’s Assumption into heaven, in the splendor of glory, is realized most fully the incorruptibility of the Ark, perennial dwelling place of God.

(Father Stefano Manelli, FI, All Generations Shall Call Me Blessed)

We can also note from Bl. Pope Pius IX: The Virgin’s singular and magnificence triumph, her innocence, her exceptional purity and sanctity, her immunity from every stain of sin, and finally her inexpressible richness and greatness in every grace, her virtues, and celestial privileges the holy Fathers contemplated: in the ark of Noah, which built by command of God remained completely secure and intact in the midst of great disaster.  (Ineffabilis Deus)