Holy Sacrifice of the Mass 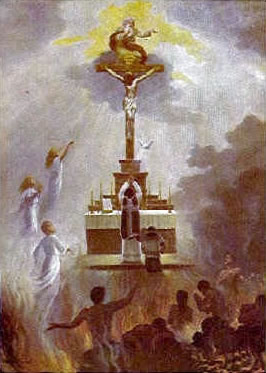 ON THE HOLY SACRIFICE OF THE MASS

The Sacrifice of the Mass is a holocaust most perfect, since we render to God an infinite honor in offering to him our Divine Lord.

It is a sacrifice of propitiation, since it is the same as that offered on the Cross, which has effaced all the sins of men by the Blood of Jesus Christ shed thereon ; which has paid with superabundance, all that was due for them to the Divine Justice. We ought then to use with great care this means of obtaining pardon of our sins, and of averting from us the vengeance of God.

The Sacrifice of the Mass is Eucharistic; by it we offer to God thanksgiving worthy of the benefits he bestows upon us. What shall I render to the Lord for all he has done for me ? asks holy David. What can we render for all his benefits? Alas! we have nothing… But, our dear Lord, touched with compassion at the sight of our poverty, has enriched us with all his treasures, has instituted the Sacrifice of the Mass in which he gives Himself to us, that we may take Him and offer Him to God His Father, in gratitude for all He has given to us.

Finally, the Sacrifice of the Mass is impetratory to obtain all goods of body and soul of which we have need; for our Lord is of infinitely greater value than anything we can ask of God.

Holy Mass has the power of obtaining what we ask:

1. Because Jesus Christ offers to his Father in our favor all the merits of His life and death.

2. Because our Lord actually prays in heaven for those who offer the Mass or for whom it is offered.

3. Because of the prayers of the Church which are made at Mass.

4. Because of our own prayers which are then more efficacious than they are at any other time.

The Sacrifice of the Mass obtains for the sinner the grace of repentance: that is, it presses the divine mercy to have pity on him. It obtains for the just, pardon of venial sins; because of the interior acts of virtue it makes him practice, and which acts of themselves efface these sins. It obtains for the just an increase of habitual grace, charity, and all virtues; it obtains great actual graces, particular succors to perform good works, to live in charity and to persevere till death. Finally, we obtain by this Sacrifice all necessary temporal things, as far as God finds it expedient to bestow them for His glory and our own salvation. Let us then always bring to this august Sacrifice the most earnest devotion; let us make an offering of ourselves with Christ to His Eternal Father, let our hearts, thoughts and imaginations be buried in God from the beginning to the end of the Mass : for there is no other act of religion so holy, so divine, so rich in graces and in heavenly blessings.