“Pray, my children; God will soon answer your prayers,” was the message of the Blessed Virgin 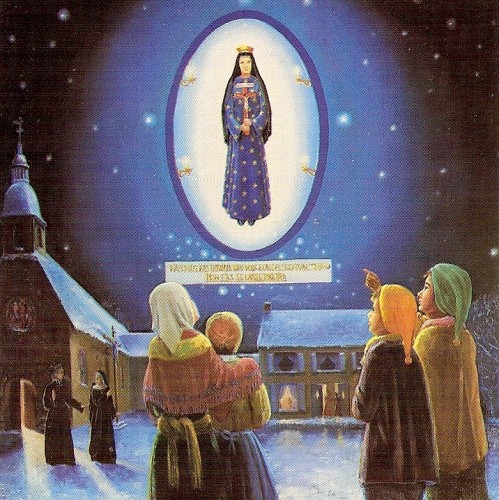 On January 17, 1871, Paris was besieged—two-thirds of the country was in the power of the Germans. The battle of Le Mans had laid Mayenne and Brittany open to the invaders. In this time of direst trouble, prayer was rising from different parts of France as from one heart and from one voice, most earnestly near that spot where the invader’s next attack was expected. This spot was Laval, chief town of Mayenne.

Then it was that Pontmain, a hamlet of some five hundred inhabitants, was to become for ever memorable, because of the heavenly favor vouchsaved that night. Even its geographical position on the borderland between Brittany and Mayenne was to assume historical importance. Seen by the light of the celestial drama about to be enacted above it, it was to appear as a sentinel guarding Brittany.

One of the children, Joseph Barbadette, to whom the vision was vouchsafed on this night, afterwards became a priest of the Congregation of the Oblates of Mary Immaculate and described the apparition as follows:

“In the air, seven or eight metres above Augustin Guidecoq’s house, I saw a woman of extraordinary beauty. She appeared to be young—about eighteen or twenty years of age—and tall of stature. She was clad in a garment of deep blue. When we were told to describe exactly the shade of this blue, we could only do so by comparing it to balls of indigo such as laundresses use for rinsing linen. Her dress was covered with gold stars, pentagonal in form, all of the same size, and brilliant, but without emitting rays. They were not very numerous, and seemed to be scattered over the blue without regard to method. The blue garment was ample, showing certain strongly marked folds, and without girdle or compression of any kind from neck to the feet. The sleeves were ample and long, falling over the hands. On the feet, which the dress left uncovered, were chaussons of the same blue as the dress, and ornamented with gold bows. On the head was a black veil half covering the forehead, concealing the hair and ears, and falling over the shoulders. Above this was a gold crown resembling a diadem, higher in front than elsewhere, and widening out at the sides. A red line, from five to six millimetres wide, encircled the crown at about the middle. The hands were small and extended toward us as in the ‘miraculous medal,’ but without emitting rays. The face was slightly oval. To the freshness of youth was added the most exquisite delicacy of feature and of tint, the complexion being pale rather than otherwise. Smiles of ineffable sweetness played about the mouth. The eyes, of unutterable tenderness, were fixed on us. I give up further attempting to describe the beautiful figure of her who looked down upon us and smiled. Like a true mother, she seemed happier in looking at us than we in contemplating her.”

The four children were Joseph Barbedette and his brother Eugene, Francoise Richer, and Jeanne-Marie Lebrosse. Augustine Mouton, a third little girl, saw nothing. The little boys had been in the barn with their father breaking up furze for the cattle.

“Pray, my children; God will soon answer your prayers,” was the message of the Blessed Virgin, conveyed in words of gold on a band of glowing white light.

On the evening of the ever-memorable January 17, 1871, the commander of the Prussian forces, having taken up his quarters at the archepiscopal palace of Le Mans, said to Mgr. Fillion, bishop of that diocese: “By this time my troops are at Laval.”

On the same evening, however, the Prussian troops in sight of Laval stopped at half-past five o’clock, about the time when the apparition first appeared above Pontmain, a few miles off. General Schmidt is reported to have said on the morning of the 18th: “We can not go farther. Yonder, in the direction of Brittany, there is an invisible Madonna barring the way.”

This sudden and inexplicable stopping of the German forces in sight of Laval, and their equally inexplicable retirement the following morning, meant, together with the saving of Brittany, the turning back of the tide of conquering soldiery from that part of France. The war was practically at an end. Twelve days later the armistice was signed at Versailles.

After that the devotion to the Blessed Virgin under the title of that of Notre Dame d’Esperance de Pontmain, Our Lady of Hope of Pontmain, was authorized by the ecclesiastical authorities, and the confraternity of that name has been extended all over the world. Signal favors, both spiritual and temporal, have been granted by heaven through it. What message, indeed, can be more consoling to hearts in the midst of hardship and tribulation everywhere, than the tender promise of the Blessed Mother, “Pray, my children; God will soon answer your prayers”?

(From The Glories and Triumphs of the Catholic Church, Benzinger Brothers, 1907.)