Even for the Holy Family: The Best Laid Plans are Set Aside 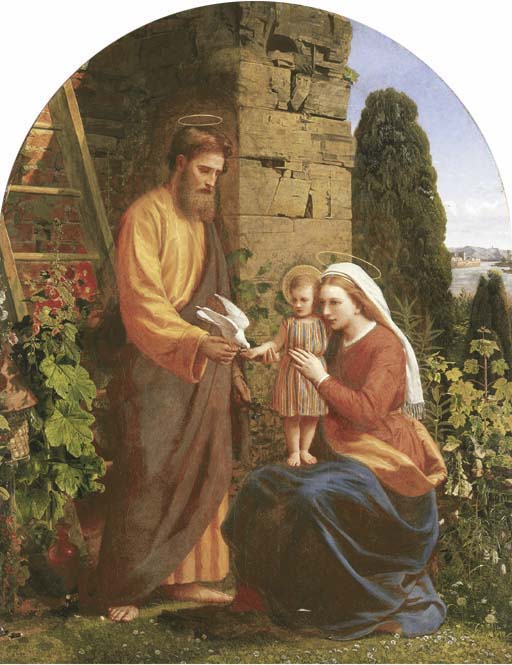 God’s plan for the infant Christ was not our Lady’s plan for Him. What good and lovely things she had to give up in order that His will should be done in her, not hers in Him, in order that what she gave to Him should be herself.

She had made the home in Nazareth ready for Him. In her mind for the nine longing months of Advent it had been His home. Joseph had made the wooden cradle and had arranged sufficient work for the lovely months ahead. Mary had woven the blankets for the cradle and clothes for the Child. The lamp that was to bum in the darkness to light the Light of the World was set in its place.  Everything in the plan was good and must surely be pleasing to God.

This happens so often, too, to those who foster the infant Christ in their souls. We like to plan the life that we shall offer to God in just the way that seems good and aesthetically right to us, to achieve holiness between four walls, with every modem convenience, undisturbed sessions of solitude, work, and prayer, and a selected number of friends on whom to exercise our charity and with whom to live, reasonably, easily, at peace.

It is difficult to imagine that a plan like this – so full of sweet order, prudence, and common sense, so harmless­ – could not be pleasing to God.  Yet God changes everything.

He sends us to where He wants to be, among those whom He wishes to be among, to do that which He wishes to do in our lives. He brings to the Bethlehem of our lives those people to whom He wishes to show the infant Christ in us, those who are to give us something for Him, just as He brought whom He would to Bethlehem: animals, angels, shepherds, and kings – unlikely people, which proves that, although there are distinctions between different kinds of men in the world, when they come into Christ’s presence there is to be no distinction, no selection. The rich and the poor, the ignorant and the learned, the laborer and the king must kneel together before the infant Christ.

With all the ingenuity and all the sincerity in the world we cannot arrange our lives as God can to ensure that we give the infant Jesus His necessity in us, not our goods or our thoughts of Him, but ourselves. Our humanity is to clothe Him, our love is to be the four walls that shelter Him, our life is to sustain Him. Our prayer must be our Lady’s prayer: “Be it done to me according to Thy word!”

He took her at her word, and they fled into the desert. She herself was His food, His warmth, His shade, His home, His cradle, and His rest.