St. Francis and the Christmas Creche 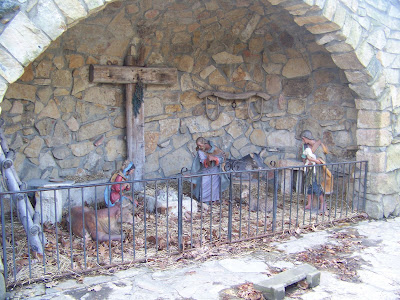 The Tradition of the Christmas Crib:

Following a beautiful and firmly-rooted tradition, many families set up their crib immediately after the feast of the Immaculate Conception, as if to relive with Mary those days full of trepidation that preceded the birth of Jesus. Putting up the crib at home can be a simple but effective way of present­ing faith, to pass it on to one’s children. The crib helps us contemplate the mystery of God’s love that was revealed in the poverty and simplicity of the Bethlehem Grotto. Saint Francis of Assisi was so taken by the mystery of the Incarnation that he wanted to present it anew at Greccio in the living nativity scene, thus beginning an old, popular tra­dition that still retains its value for evangelization today. Indeed, the crib can help us understand the secret of the true Christmas because it speaks of the humility and merciful goodness of Christ, who “though he was rich he made himself poor” for us (2 Cor 8: 9). His poverty enriches those who embrace it and Christmas brings joy and peace to those who, like the shepherds in Bethlehem, accept the Angel’s words: “Let this be a sign to you: in a manger you will find an infant wrapped in swad­dling clothes” (Lk 2: 12). This is still the sign for us too, men and women of the third millennium. There is no other Christmas.

In the year 1223, St. Francis, a deacon, was visiting the town of Grecio to celebrate Christmas. Grecio was a small town built on a mountainside overlooking a beautiful valley. The people had cultivated the fertile area with vineyards. St. Francis realized that the chapel of the Franciscan hermitage would be too small to hold the congregation for Midnight Mass. So he found a niche in the rock near the town square and set up the altar. However, this Midnight Mass would be very special, unlike any other Midnight Mass.

It happened in the third year before his death, that in order to excite the inhabitants of Grecio to commemorate the nativity of the Infant Jesus with great devotion, [St. Francis] determined to keep it with all possible solemnity; and lest he should be accused of lightness or novelty, he asked and obtained the permission of the sovereign Pontiff. Then he prepared a manger, and brought hay, and an ox and an ass to the place appointed.

The brethren were summoned, the people ran together, the forest resounded with their voices, and that venerable night was made glorious by many and brilliant lights and sonorous psalms of praise. The man of God [St. Francis] stood before the manger, full of devotion and piety, bathed in tears and radiant with joy; the Holy Gospel was chanted by Francis, the Levite of Christ. Then he preached to the people around the nativity of the poor King; and being unable to utter His name for the tenderness of His love, He called Him the Babe of Bethlehem.

A certain valiant and veracious soldier, Master John of Grecio, who, for the love of Christ, had left the warfare of this world, and become a dear friend of this holy man, affirmed that he beheld an Infant marvellously beautiful, sleeping in the manger, Whom the blessed Father Francis embraced with both his arms, as if he would awake Him from sleep. This vision of the devout soldier is credible, not only by reason of the sanctity of him that saw it, but by reason of the miracles which afterwards confirmed its truth. For example of Francis, if it be considered by the world, is doubtless sufficient to excite all hearts which are negligent in the faith of Christ; and the hay of that manger, being preserved by the people, miraculously cured all diseases of cattle, and many other pestilences; God thus in all things glorifying his servant, and witnessing to the great efficacy of his holy prayers by manifest prodigies and miracles.