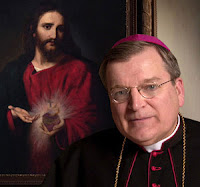 Congratulations to Archbishop Raymond Burke for his appointment as a member of the Congregation of the Causes of Saints.
Diane at Te Deum Laudamus and her commenters has compiled a list of the many responsibilities given to Bishop Burke since going to Rome. Here is the list:

The story was also picked up by Patrick Madrid and Thomas Peters both of whom agree with Diane that this flies in the face of some dissenting Catholics who suggest that he was moved to Rome to silence his orthodox views.  Not only is this not the case but he is a prime candidate for Cardinal.
La Crosse – Marian Symposium
If you wish to congratulate him personally on his latest appointment, he will be coming on August 21st to the National Shrine of Our Lady of Guadalupe in La Crosse, WI  which he was instrumental in having built while he was the bishop there. The occasion will be the 2010 Marian Symposium, MARY: COREDEMPTRIX, MEDIATRIX, ADVOCATE presented by the Franciscan Friars of the Immaculate, the  Shrine of Our Lady of Guadalupe and Vox Populi Mariae Mediatrici: