DOCTOR SUBTILIS: THEOLOGIAN OF THE IMMACULATE CONCEPTION and FOUNDER OF THE SCOTISTIC SCHOOL OF SCHOLASTIC THEOLOGY, a FRIAR MINOR

Next to St. Bonaventure, Bl. John is perhaps the most important and influential theologian in the history of the Franciscan Order. He was the founder of the Scotistic School in Theology, and until the time of the French Revolution his thought dominated the Roman Catholic faculties of theology in nearly all the major universities of Europe. He is chiefly known for his theology on the Absolute Kingship of Jesus Christ, the Immaculate Conception of the Blessed Virgin Mary, and his philosophic refutation of evolution.

He was born in Duns, Berwickshire, Scotland, around 1265. As a little boy, he had difficulty in learning and so he turned to Mary, the Seat of Wisdom, asking her to heal his dullness so that he could advance in his studies. Mary appeared to him and granted his request. Going back to school, he astonished his classmates and teachers. Bl. John resolved to make use of the heavenly gift of great intelligence, above all, to glorify the sweet and glorious Virgin Mary. At the age of 15, he entered the Novititate of the Order of Friars Minor (the Franciscans) at Dumfries, in the Kingdom of Scotland.

Later during the night of Christmas, 1299 at the Oxford Convent, the Blessed Mother appeared to him and placed on his arms the Child Jesus who kissed and embraced him fondly. This was perhaps the occasion which inspired Blessed John to write so profoundly and fluently on the absolute primacy of Christ and the reason for the Incarnation. Christ’s Incarnation, which is decreed from all eternity even apart from the Redemption, is the supreme created manifestation of God’s love.

It was also in Paris that Blessed John came to be called as the “Marian Doctor” after he championed the privilege of Mary’s Immaculate Conception. In England, Bl. John taught the truth of this Marian privilege without any opposition. But at Paris the situation was reversed. The academic body of the University admitted only the purification of Mary in the womb of Her mother St. Anne, like St. John the Baptist. Even St. Bonaventure and St. Thomas Aquinas, the great Parisian Masters, were not able to solve the problem of the universality of original sin and of the efficacy of Christ’s Redemption. They thought that even the Blessed Virgin Mary was included in this universality, and therefore subject to contract the original stain even if only for an instant, so that she may also be redeemed. Scotus in his attempt to introduce and teach a theological position different from that upheld by the university, had to appear in a public dispute before the whole academic body, at the risk of expulsion from the university if he failed to defend his doctrine. Bl. John Scotus prepared himself for the event in prayer and recollection and in total confidence to the Immaculate Virgin, the Seat of Wisdom.

Two Papal legates presided over the dispute. Then with powerful dialectic and with deep and subtle reasoning, Blessed Scotus refuted all the objections of the learned men in attendance, undermining the foundation of every argument contrary to Mary’s Immaculate Conception. From that day the University of Paris took up the same cause to defend this privilege of the Blessed Virgin Mary.

Blessed John died on 8th November, 1308, barely 43 years of age. He was called “blessed” almost immediately after his death. In 1854, Pope Pius IX solemnly declared that the Marian doctrine of Bl. John, was a correct expression of the faith of the Apostles: “at the first moment of Her conception, Mary was preserved free from the stain of original sin, in view of the merits of Jesus Christ.” The seal of the Church’s approval was also placed on Bl. John’s doctrine on the universal primacy of Christ when the feast of Christ the King was instituted in 1925. On March 20, 1992 Bl. John Duns Scotus was officially beatified by Pope John Paul II at St. Peter’s Basilica in Rome. Bl. John Duns Scotus, “The minstrel of the Word Incarnate” and “Defender of Mary’s Immaculate Conception” is presented by Pope John Paul II to our age “wealthy of human, scientific and technological resources, but in which many have lost the sense of faith and lead lives distant from Christ and His Gospel,” as “a Teacher of thought and life.”

( the above is excerpted from http://www.ewtn.com/library/MARY/SCOTUS.htm) 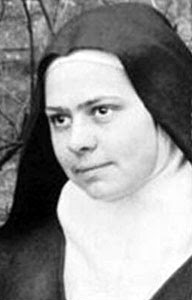 Blessed Elizabeth of the Trinity

The Saint of the Divine Indwelling

This theme of being the “house of God,” then, was at first closely associated with the mystery of the Eucharist in the mind of Elizabeth. In a poem that she would later write to commemorate the seventh anniversary of her First Communion, she meditates upon the day:

When Jesus made in me His dwelling place,
When God took possession of my heart,
So well that since that hour,
Since that mysterious colloquy,
That divine and delicious meeting,
I have aspired to nothing else but to give my life
In order to return a bit of His great love
To the Beloved of the Eucharist
Who reposed in my feeble heart,
Inundating it with all of his favors.

Likewise, Elizabeth once wrote the following words to a friend who had just made her First Communion: “If He came this morning into your little heart, it was not to pass through it and go away, but to remain there always.” It seems that the future Blessed understood that by giving himself to her in the sacrament of the Eucharist, Jesus had come to dwell within her in a new way.

Elizabeth writes in a poem that she composed for Christmas of 1901:

He comes to reveal the mystery,
To give all of the Father’s secrets
To lead from glory to glory
Even unto the bosom of the Trinity.

Elizabeth, then, experienced Christ as the one who comes to reveal to us the Father’s love and to lead us to share in the divine life of Trinitarian love.

Blessed Elizabeth entered the Carmelite Order in 1901. Here the young Carmelite found many passages in St Paul that helped her discover the great dignity of this vocation of the Christian to share in the life of the Trinity through union with Christ. She was especially drawn to the eighth chapter of Paul’s letter to the Romans, in which the great saint writes: “For those He foreknew He also predestined to be conformed to the image of His Son, so that He might be the firstborn among many brothers. And those He predestined He also called; and those He called He also justified; and those He justified He also glorified” (Rom 8.29-30).

Likewise, she drew great riches from the first chapter of the letter to the Ephesians, in which Paul writes: “He chose us in Christ, before the foundation of the world, to be holy and without blemish before Him. In love He destined us for adoption to Himself through Jesus Christ. In accord with the favor of His will, for the praise of the glory of His grace that He granted us in His beloved” (Eph 1.4-6)

Elizabeth realized that all people are created in order to be united to Jesus, to be made like Him, even in His sufferings, in order to share in the relationship of love that the risen Jesus shares with the Father and the Holy Spirit. She explains this great plan of God in one of her meditations:

God bends lovingly over this soul,
His adopted daughter, who is so
conformed to the image of His Son,
the ‘ first born among all creatures,’
and recognizes her as one of those
whom He has ‘predestined, called,
justified.’ And His fatherly heart
thrills as He thinks of consummating
His work, that is, of ‘glorifying’ her
by bringing her into His kingdom,
there to sing for ages unending ‘
the praise of His glory’.

Elizabeth’s last audible words before her death were, “I am going to Light, to Love, to Life.” She died on November 9, 1906, at the age of 26, after having lived in Carmel for only five years.

Make a little cell in your heart for Jesus of the Agony; take refuge there, when you hear Him outraged by men, try to make reparation; you, at least, love Him and keep your heart quite pure for Him. Oh! If you only knew how the good God love pure hearts! It is there that He loves to reign.

“As long as my will desires that which is alien to the divine will, has preferences for one thing or another, I remain like a child; I do not walk in love with giant strides. The fire has not yet burnt away all the dross, and the gold is not yet pure. I am still seeking myself. 0 Lord, You have not yet done away with all my resistance toYou. But when the crucible has consumed all tainted love, all tainted pain, all tainted fear, then love’ is perfect, and the golden ring of our union is wider than heaven and earth.

But in order to attain this I must die daily to myself. O Jesus, I wish to die, to decrease, to deny myself daily more and more, in order that You may grow and be exalted in me. As a ‘ little one’ I dwell in the depths of my poverty; I see my nothingness, my penury, my weakness; I see that I am incapable of progress, of perseverance; I appear to myself n all my destitution; I prostrate myself in my wretchedness, and recognizing my state of dire need, I spread it out before You, my divine Master. As far as my will-not my feelings-is concerned, I set my joy in everything that can humble me, immolate me, destroy self in me, for I want to give place to You, O Lord; I no longer wish to live by my own life, but to be transformed in You, so that my life may be more divine than human, and that, inclining unto me, the Father may recognize Your image, the image of His beloved Son, in whom He is well pleased”

(Blessed Elizabeth of the Trinity)