Cardinal Ratzinger’s Meditations on the 13th and 14th Stations

From the Gospel according to Matthew 27:54-55: When the centurion and those who were with him, keeping watch over Jesus, saw the earthquake and what took place, they were filled with awe, and said, “Truly this was the Son of God!” There were also many women there, looking on from afar, who had followed Jesus from Galilee, ministering to him.

MEDITATION: Jesus is dead. From his heart, pierced by the lance of the Roman soldier, flow blood and water: a mysterious image of the stream of the sacraments, Baptism and the Eucharist, by which the Church is constantly reborn from the opened heart of the Lord. Jesus’ legs are not broken, like those of the two men crucified with him. He is thus revealed as the true Paschal lamb, not one of whose bones must be broken (cf. Es 12:46).

And now, at the end of his sufferings, it is clear that, for all the dismay which filled men’s hearts, for all the power of hatred and cowardice, he was never alone. There are faithful ones who remain with him. Under the Cross stand Mary, his Mother, the sister of his Mother, Mary, Mary Magdalen and the disciple whom he loved.

A wealthy man, Joseph of Arimathea, appears on the scene: a rich man is able to pass through the eye of a needle, for God has given him the grace. He buries Jesus in his own empty tomb, in a garden. At Jesus’ burial, the cemetery becomes a garden, the garden from which Adam was cast out when he abandoned the fullness of life, his Creator. The garden tomb symbolizes that the dominion of death is about to end.

A member of the Sanhedrin also comes along, Nicodemus, to whom Jesus had proclaimed the mystery of rebirth by water and the Spirit. Even in the Sanhedrin, which decreed his death, there is a believer, someone who knows and recognizes Jesus after his death. In this hour of immense grief, of darkness and despair, the light of hope is mysteriously present. The hidden God continues to be the God of life, ever near. Even in the night of death, the Lord continues to be our Lord and Savior. The Church of Jesus Christ, his new family, begins to take shape.

PRAYER : Lord, you descended into the darkness of death. But your body is placed in good hands and wrapped in a white shroud (Mt 27:59). Faith has not completely died; the sun has not completely set. How often does it appear that you are asleep? How easy it is for us to step back and say to ourselves: “God is dead”.

In the hour of darkness, help us to know that you are still there. Do not abandon us when we are tempted to lose heart. Help us not to leave you alone. Give us the fidelity to withstand moments of confusion and a love ready to embrace you in your utter helplessness, like your Mother, who once more holds you to her breast. Help us, the poor and rich, simple and learned, to look beyond all our fears and prejudices, and to offer you our abilities, our hearts and our time, and thus to prepare a garden for the Resurrection.

Jesus is laid in the tomb

From the Gospel according to Matthew 27:59-61: Joseph took the body, and wrapped it in a clean linen shroud, and laid it in his own new tomb, which he had hewn in the rock; and he rolled a great stone to the door of the tomb, and departed. Mary Magdalene and the other Mary were there, sitting opposite the sepulcher.

MEDITATION: Jesus, disgraced and mistreated, is honorably buried in a new tomb. Nicodemus brings a mixture of myrrh and aloes, about a hundred pounds weight, which gives off a precious scent. In the Son’s self-offering, as at his anointing in Bethany, we see an “excess” which evokes God’s generous and superabundant love. God offers himself unstintingly. If God’s measure is superabundance, then we for our part should consider nothing too much for God. This is the teaching of Jesus himself, in the Sermon on the Mount (Mt 5:20).

But we should also remember the words of Saint Paul, who says that God “through us spreads the fragrance of the knowledge of Christ everywhere. We are the aroma of Christ” (2 Cor 2:14ff.). Amid the decay of ideologies, our faith needs once more to be the fragrance which returns us to the path of life.

At the very moment of his burial, Jesus’ words are fulfilled: “Truly, truly, I say to you, unless a grain of wheat falls to the earth and dies, it remains alone; but if it dies, it bears much fruit” (Jn 12:24). Jesus is the grain of wheat which dies. From that lifeless grain of wheat comes forth the great multiplication of bread which will endure until the end of the world. Jesus is the bread of life which can satisfy superabundantly the hunger of all humanity and provide its deepest nourishment.

Through his Cross and Resurrection, the eternal Word of God became flesh and bread for us. The mystery of the Eucharist already shines forth in the burial of Jesus.

The eternal Word, through his Incarnation and death, has become a Word which is close to us: you put yourself into our hands and into our hearts, so that your word can grow within us and bear fruit. Through the death of the grain of wheat you give us yourself, so that we too can dare to lose our life in order to find it, so that we too can trust the promise of the grain of wheat. Help us grow in love and veneration for your Eucharistic mystery ­ to make you, the Bread of heaven, the source of our life.

Help us to become your “fragrance”, and to make known in this world the mysterious traces of your life. Like the grain of wheat which rises from the earth, putting forth its stalk and then its ear, you could not remain enclosed in the tomb: the tomb is empty because he ­ the Father ­ “did not abandon you to the nether world, nor let your flesh see corruption” (Acts 2:31; Ps 16:10 LXX). No, you did not see corruption. You have risen, and have made a place for our transfigured flesh in the very heart of God. Help us to rejoice in this hope and bring it joyfully to the world. Help us to become witnesses of your resurrection. 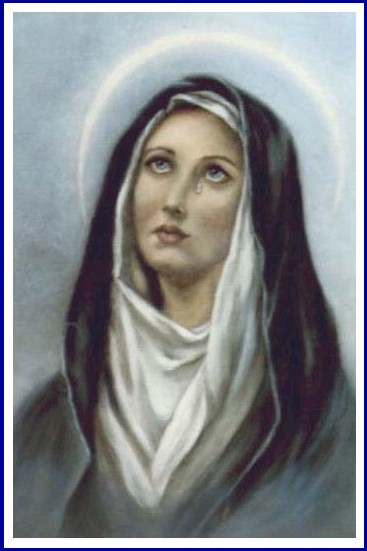