…And thy own soul a sword shall pierce

that the thoughts of many hearts may be revealed.

HIS CROSS AND ACHIEVEMENT

The supreme achievement of Christ was the saving of the human race from eter­nal doom by means of His redeeming cross. As His cooperator par excellence in this tremendous work, His Mother shared in His achievement. So important and intimate was Mary’s participation in the saving of mankind from eternal perdition that the Church has never hesitated to give her the title of co-redemptrix.

By uniting her unbounded sorrow on Calvary with the sacrifi­cial suffering of her divine Son, Our Lady was vividly illustrating the doctrine that the suffering of every member of the Mystical Body of Christ becomes precious when joined with His. She was expounding in practice the teaching St. Paul was to enunciate in saying that he made up for the Church in his own body those things which were lacking in the Passion of our Lord.

Mary could not have taught more clearly than she did on Calvary that all the members of the Church not only can, but ought to share in the achievement of her Son by uniting their crosses with His.

Fr. Bertrand Weaver C.P. (His Cross in Your Life)

The Role of the Blessed Mother in the Economy of Salvation

55. The Sacred Scriptures of both the Old and the New Testament, as well as ancient Tradition show the role of the Mother of the Savior in the economy of salvation in an ever clearer light and draw attention to it.

56. The Father of mercies willed that the incarnation should be preceded by the acceptance of her who was predestined to be the mother of His Son, so that just as a woman contributed to death, so also a woman should contribute to life. That is true in outstanding fashion of the mother of Jesus, who gave to the world Him who is Life itself and who renews all things, and who was enriched by God with the gifts which befit such a role.

It is no wonder therefore that the usage prevailed among the Fathers whereby they called the mother of God entirely holy and free from all stain of sin, as though fashioned by the Holy Spirit and formed as a new creature. Adorned from the first instant of her conception with the radiance of an entirely unique holiness, the Virgin of Nazareth is greeted, on God’s command, by an angel messenger as “full of grace”…she devoted herself totally as a handmaid of the Lord to the person and work of her Son, under Him and with Him, by the grace of almighty God, serving the mystery of redemption.

Rightly therefore the holy Fathers see her as used by God not merely in a passive way, but as freely cooperating in the work of human salvation through faith and obedience. Hence not a few of the early Fathers gladly assert in their preaching, “The knot of Eve’s disobedience was untied by Mary’s obedience; what the virgin Eve bound through her unbelief, the Virgin Mary loosened by her faith.” Comparing Mary with Eve, they call her “the Mother of the living,” and still more often they say: “death through Eve, life through Mary.

57. This union of the Mother with the Son in the work of salvation is made manifest from the time of Christ’s virginal conception up to His death… she heard Simeon foretelling that her Son would be a sign of contradiction and that a sword would pierce the mother’s soul, that out of many hearts thoughts might be revealed.

58. In the course of her Son’s preaching she received the words whereby in extolling a kingdom beyond the calculations and bonds of flesh and blood, He declared blessed those who heard and kept the word of God, as she was faithfully doing. After this manner the Blessed Virgin advanced in her pilgrimage of faith, and faithfully persevered in her union with her Son unto the cross, where she stood, in keeping with the divine plan, grieving exceedingly with her only begotten Son, uniting herself with a maternal heart with His sacrifice, and lovingly consenting to the immolation of this Victim which she herself had brought forth.

Finally, she was given by the same Christ Jesus dying on the cross as a mother to His disciple with these words: “Woman, behold thy son”. 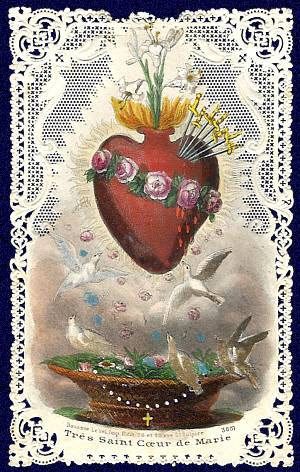 On the Blessed Virgin and the Church

60. There is but one Mediator as we know from the words of the apostle, “for there is one God and one mediator of God and men, the man Christ Jesus, who gave himself a redemption for all”. The maternal duty of Mary toward men in no wise obscures or diminishes this unique mediation of Christ, but rather shows His power. For all the salvific influence of the Blessed Virgin on men originates, not from some inner necessity, but from the divine pleasure.

It flows forth from the superabundance of the merits of Christ, rests on His mediation, depends entirely on it and draws all its power from it. In no way does it impede, but rather does it foster the immediate union of the faithful with Christ.

61. Predestined from eternity by that decree of divine providence which determined the incarnation of the Word to be the Mother of God, the Blessed Virgin was in this earth the virgin Mother of the Redeemer, and above all others and in a singular way the generous associate and humble handmaid of the Lord. In this singular way she cooperated by her obedience, faith, hope and burning charity in the work of the Savior in giving back supernatural life to souls. Wherefore she is our mother in the order of grace.

62. Therefore the Blessed Virgin is invoked by the Church under the titles of Advocate, Auxiliatrix, Adjutrix, and Mediatrix. This, however, is to be so understood that it neither takes away from nor adds anything to the dignity and efficaciousness of Christ the one Mediator.

65. For Mary, who since her entry into salvation history unites in herself and re-echoes the greatest teachings of the faith as she is proclaimed and venerated, calls the faithful to her Son and His sacrifice and to the love of the Father… The Virgin in her own life lived an example of that maternal love, by which it behooves that all should be animated who cooperate in the apostolic mission of the Church for the regeneration of men.

The Cult of the Blessed Virgin in the Church

66. Placed by the grace of God, as God’s Mother, next to her Son, and exalted above all angels and men, Mary intervened in the mysteries of Christ and is justly honored by a special cult in the Church. Clearly from earliest times the Blessed Virgin is honored under the title of Mother of God, under whose protection the faithful took refuge in all their dangers and necessities… “All generations shall call me blessed, because He that is mighty hath done great things to me”… while the Mother is honored, the Son, through whom all things have their being and in whom it has pleased the Father that all fullness should dwell, is rightly known, loved and glorified and that all His commands are observed.