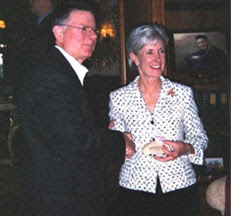 What could be worse than a tax cheat for Treasury Secretary you ask? Another tax cheat for HHS Head? NO, it gets worse. How about the Kansas Governor who helped Dr George Tiller the baby killer evade justice numerous times? Gov Kathleen Sibelius has to be the most crooked, most pro-abortion pick Obama has made yet.
“As the health secretary, Sebelius could have an impact in crafting a health care plan that could cover abortions with taxpayer funds or require insurance companies to cover abortions in their plans.
Sebelius is most notorious for her close relationship with late-term abortion practitioner George Tiller, who has escaped prosecution and accountability thus far for allegedly repeatedly violating state abortion laws.
He’s done so in part because of the lax standards of Sebelius and her political allies, to whom Tiller has donated hundreds of thousands of dollars. (See the photo of the two at a secret party honoring the notorious late term abortionist.)
Governor Sebelius vetoed a bill last April that the legislature approved that would have strengthened the state’s limits on late-term abortions.
That followed by a year her veto of a bill requiring explicit medical reasons for a late abortion, which was preceded by vetoing other pro-life legislation in 2006, 2005 and 2003.”
Read the entire story at Life News.