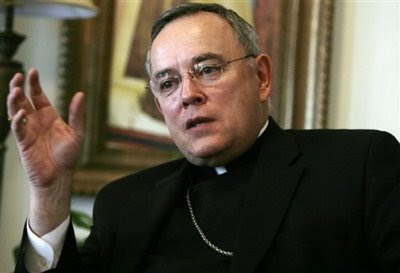 Excerpts from Archbishop Chaput’s Address to ENDOW
(Educating on the Nature and Dignity of Women) on October 17:

“Professor Kmiec argues that there are defensible motives to support Senator Obama. Speaking for myself, I do not know any proportionate reason that could outweigh more than 40 million unborn children killed by abortion and the many millions of women deeply wounded by the loss and regret abortion creates.”

“To suggest – as some Catholics do – that Senator Obama is this year’s ”real” prolife candidate requires a peculiar kind of self-hypnosis, or moral confusion, or worse. To portray the 2008 Democratic Party presidential ticket as the preferred ”prolife” option is to subvert what the word ”prolife” means.”

“And here’s the irony. None of the Catholic arguments advanced in favor of Senator Obama are new. They’ve been around, in one form or another, for more than 25 years. All of them seek to ”get beyond” abortion, or economically reduce the number of abortions, or create a better society where abortion won’t be necessary. All of them involve a misuse of the seamless garment imagery in Catholic social teaching. And all of them, in practice, seek to contextualize, demote and then counterbalance the evil of abortion with other important but less foundational social issues.”

“Meanwhile, the basic human rights violation at the heart of abortion – the intentional destruction of an innocent, developing human life – is wordsmithed away as a terrible crime that just can’t be fixed by the law. I don’t believe that. I think that argument is a fraud. And I don’t think any serious believer can accept that argument without damaging his or her credibility. We still have more than a million abortions a year, and we can’t blame them all on Republican social policies. After all, it was a Democratic president, not a Republican, who vetoed the partial birth abortion ban – twice.”

The truth is that for some Catholics, the abortion issue has never been a comfortable cause. It’s embarrassing. It’s not the kind of social justice they like to talk about. It interferes with their natural political alliances. And because the homicides involved in abortion are ”little murders” – the kind of private, legally protected murders that kill conveniently unseen lives – it’s easy to look the other way.”