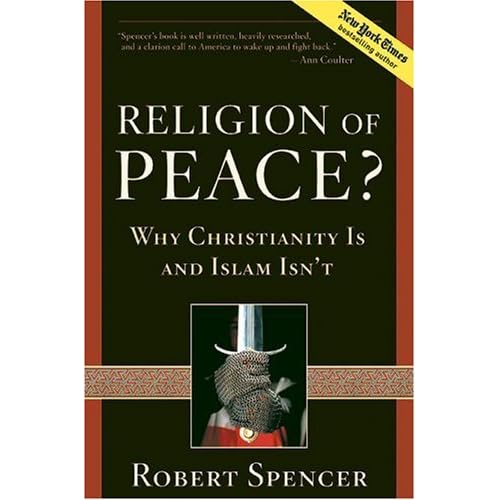 Robert Spencer’s new book, “Religion of Peace? Why Christianity Is and Islam Isn??t??, speaks about the liberal-minded view of moral equivalence and how the left view Christianity (Fundamentalism) as a greater threat than that posed by Islam. I??m still reading the book so I can??t speak to it entirely but what I??ve read so far is most excellent. There’s an article today pertaining to a new “documentary” by CNN on one of Robert’s blogs, Jihad Watch. This “documentary”, called “God’s Warriors” lumps all religions into one category of “fundamentalism”.

You see, the left-minded folks seem to like to equate

Christianity and Islam as both being rooted in violence and bloodshed. They like to cite the Inquisition (Spanish only though), slavery and the Crusades as their proof that Christianity is just as bad as Islam. Of course, they (leftists, liberals, multi-culturalists…pick a name) distort the history of the Inquisitions, “millions?? tortured and killed instead of the thousands (of course, one is too many but how about some perspective huh?). Slavery was abolished by Christians in the 19th Century-something to do with human dignity I imagine-while it is still condoned in many Muslim countries, or openly practiced like Sudan (go figure). The “bloody?? Crusades were actually organized responses to reclaim Muslim-conquered Christian lands. Yes, there were unsanctioned killings and sinful actions by crusaders and God alone will judge their actions. The Crusades were executed (with little success) over 800 years ago. Jihad is alive and well and Islam doesn??t give back what it takes (The Hagia Sophia comes to mind). As Robert puts it in his book, no country has ever willfully converted to Islam.
Anyway, go check out Jihad Watch. Educate yourselves and your families. Christianity is seen as weak because of philosophies like “…if one strike thee on thy right cheek, turn to him also the other” and “…all that take the sword shall perish with the sword”. Christianity and Christian values are under attack, arm yourselves. Knowledge is power.